Quick Hits at the Halfway Mark

As of today we are halfway through 2013, and with this post, I am halfway to my goal of posting once a week throughout 2013. Given the sentiment of my friend's post outlining the decline of the Blog Era, it may not be the most critical of goals, but it has been good for keeping my writing skills in practice. Anyway, in spite of my frequent posting, I still haven't written about a handful of significant events from the past six months. Given the tag line of this blog, that's kind of strange. So here are a few quick updates in summary:

Back in January, on the heels of attending my first Sundance Film Festival (an event I did blog about), I started making weekly appearances on the opening segment of the KJZZ Movie Show. It has been a lot of fun working with my old KJZZ Cafe boss Dean again, as well as getting to know my co-stars(?) Steve and Melanie. Whereas before I was screening maybe one movie a month or so, I'm now seeing at least 1-2 a week, and am starting to recognize the other critics at press screenings. Here's a lovely picture of Dean trying to buff the highly-reflective gleam off the top of my head before a recent taping: 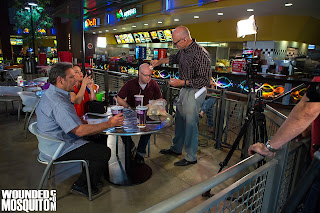 The family got the official word back in December, but it wasn't until spring that my sister went public with the news that I would be getting a second niece in August of this year. Uncle 1.0 has been a blast...I can only imagine that Uncle 2.0 is going to become even better. (Incidentally, a heartfelt post on the joys of being an uncle is one of those unfinished projects I mentioned a few months back. By the time I actually get it posted, my niece will probably be a college graduate.)

Signed up for Netflix

Thanks to a one-month free trial and the lure of 15 brand-new episodes of "Arrested Development," I finally caved in and picked up a subscription to Netflix. In the time since, I've also made my way through series like "Undeclared" (the short-lived follow-up to "Freaks and Geeks") and the last couple seasons of "My Name is Earl" that aired after I got distracted by the show's 3rd season missteps. (Another motivation for joining the Netflix crew? Trying to find my way out from under the thumb of Comcast's Utah monopoly.)

At the end of May, I made my third trip to Seattle since the summer of 2010 (and thanks to double-booking a wedding shoot for the same weekend, I almost didn't). Once again, the impetus for the journey was Cheetahman's online vendor convention. As it was our third trip, we didn't spend so much time doing touristy things, and instead tried to achieve a nice balance between resting, eating good food, and eating more good food. I took plenty of pictures, and was also able to hang out with a couple of longtime friends, including an old mission buddy I hadn't seen in more than ten years.

Some of the most interesting news of the past few months has been on the music scene. Back in April, the Atomic Thunderlips (the band that used to play exclusive gigs at the Legacy charter school) was recruited to participate in the Rock 'n Bowl program at Orchard Lanes in North Salt Lake. Our first gig (three 45-minute sets packed into three hours on a Friday night) went so well that the managers brought us back earlier this month. Even better, both gigs were paid, making Thunderlips my all-time most profitable band. (Next up: a kickoff set at the Relay for Life event in Salt Lake in July.) 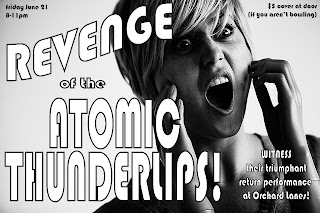 I'll save the best for last. Some of you may be interested (even relieved) to know that I recently ended an extended social sabbatical and started going on real dates again. Early results suggest I still have no idea what I am doing, but I figured it was important to comment on the one aspect of my identity that is most central to the theme of this blog.

So there you go...a few random bits hastily thrown together to meet a post quota. The streak continues!

Posted by The Professor at 5:28 PM