After missing the press screening earlier this week due to a schedule conflict, I wound up seeing "World War Z" twice this weekend, and I liked it a lot better the second time. Partly it is because a second viewing allows you to digest a film's nuance a little deeper, but mostly I think it was because my first screening was marred by the four teenagers on my row who insisted on talking through the entire feature. 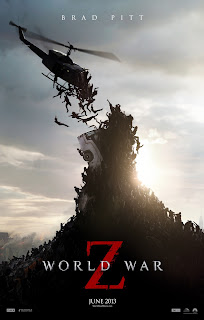 Missing the press screening was hard, because I was more excited to see "World War Z" than any movie since "Taken 2." Seriously. "Taken 2" kind of sucked, but coming off the original, a lot of people were excited to see Liam Neeson kill pimps for another two hours. As a confessed zombie nut--I've been hosting an annual "Zombie Fest" for going on seven years now--one might understand why WWZ would tweak the same nerve.

At the same time, I approached my initial viewing with a combination of dread and hope, due to all the negative publicity that has surrounded the movie over the last several months. Concerns over the new film have fallen into two camps:

1. The movie abandons the interview format of Max Brooks's source novel, and instead opts for a traditional linear narrative using Brad Pitt as protagonist.

2. The first cut of the film was a disaster, so Pitt and co. brought in help to do an 11th hour re-write and re-shoot to salvage the project that effectively replaced the entire third act of the original movie.

Before I dig into these points, let me summarize: "World War Z" follows the events of a worldwide zombie epidemic through the eyes of an ex-UN operative named Gerry, played by Brad Pitt. Once he manages to get his family to safety in the chaos of the initial outbreak, he returns to his old employer to track the globe in the middle of the carnage, desperately searching for a solution to an outbreak of rabies that is turning everyday folks into raging, violent madmen. Effectively, WWZ could be seen as the lost footage shoehorned between the opening outbreak in "28 Days Later" and the scene where Jim wakes up in his hospital bed.

So the film follows a pretty simple, linear plot, which leads me to address that first point. If you're the kind of dedicated purist who feels obligated to hate any film that doesn't fall lock-step in line with whatever book, TV series or foreign film original that provided the source material, you'll probably hate WWZ. It's not quite as ridiculous a re-interpretation as Will Smith's "I, Robot" from a few years ago, but it's still a drastic departure.

That being said, I'm not sure a departure was a bad thing. I enjoyed the original novel, but have to admit it got a bit exhaustive at points. Translating such a serial novel directly to the screen would yield an exhaustive and tedious result. Some have suggested a TV miniseries would have been a better idea, and I'm inclined to agree.

What WWZ does instead is offer zombie fans a relatively unique perspective on the genre. In the vast majority of zombie movies, the narrative lands in the aftermath of the apocalypse, focusing on a small group of survivors trying to stay alive in a suddenly treacherous landscape. If we get to see the outbreak itself, it's usually through a quick intro or flashback, or limited to the perspective of one of those same small groups (like in the original "Night of the Living Dead"). WWZ gives us a worldwide view of the apocalypse as it is happening, in many shots using excellent CGI to give us a birds-eye view on the scope of the carnage, and frankly, providing a much more realistic and plausible perspective of how an army of the undead could overwhelm modern military resistance.

As far as the third-act issue, I'm a little split. On my first screening, I wasn't crazy about the new "fixed" finale, but I think that was because I spent most of what was meant to be a quiet and suspenseful sequence debating whether to climb two seats over and go post-apocalyptic on the 17-year-old jerk who couldn't keep his mouth shut. Seeing it again on Saturday, I liked it a lot better, even though it is still a slightly anti-climactic finish considering the scope of some of the film's earlier sequences. I don't know that it's likely, but I'm personally hoping that the DVD release includes that discarded ending, because I'm curious to see if it was really that bad.

It's very clear that the filmmakers wanted to keep WWZ in PG-13 territory. Contrary to the philosophy of most zombie films, WWZ keeps a lot of the violence just out of the shot, going for terror instead of a traditional gore-fest. So if you're the kind of zombie fan that feels like no intestines = no good, you'll be very disappointed.

But if you're not a blood and guts hound, or are just looking for a nice entry to the zombie genre, "World War Z" could be your gateway to a brave new world, and maybe even a ticket to Zombie Fest 7 this fall...just as long as you don't talk through the movies.
Posted by The Professor at 5:48 PM