This morning I feel for the city of Cleveland.  LeBron James, not so much.

Not that I have anything against James.  On the contrary, aside from last summer's little Nike cover-up, I think Mr. We Are All Witnesses is one of the better guys in the league.  You know, because I'm so close with so many of them.

No, I feel for Cleveland because of personal ties.  My mom grew up in Cleveland, and I've been a witness to a lot of their disappointments over the years.  The closest thing I had to a hometown pro football team growing up was the Browns, and I had to live through The Drive, The Fumble, The Blowout (the less-remembered third time in four years the hated Broncos beat Cleveland in the AFC Championship before promptly pooping their pants in the Super Bowl).

I remember Art Modell moving the team in the mid-90's, then winning a Super Bowl with a guy who may-or-may-not have been involved in a double-homicide.  (For comparison, imagine if Larry Miller had moved the Jazz to Florida in 2005, only if the team had been here since 1947.  Oh yeah, then if they'd won a title last year as the Jacksonville Junebugs.)

I also had to hear all the jokes about "The Mistake By The Lake," even though I couldn't figure out why a city that was home to The Rock and Roll Hall of Fame, The Pro Football Hall of Fame (an hour south in Canton), three major pro franchises with passionate fan bases, and even a wealth of historic culture (Kirtland, Ohio and the Amish) could be seen as such a boring place.

With that in mind, the Cavs' collapse falls right in line with unfortunate tradition.  Sometimes I feel like Cleveland and Salt Lake are sister cities.  But I can take solace in the fact that the Jazz weren't supposed to beat the Lakers, that we were down two starters, and that we swept them first anyway (see: 1998).  The Cavs were supposed to win, though.  For years now, LeBron James' impending free agency and the national media have held Cleveland hostage like a head cheerleader dating a band geek. 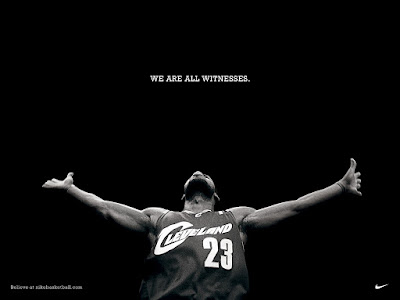 Posted by The Professor at 9:12 AM