Imagine that your favorite author wrote ten books over the course of his/her entire career.  You've read each one a dozen times, and have multiple dog-eared copies of your favorite titles.

Now imagine that years down the line, well after your chosen author has hung up the quill, you splurge on a special edition anthology that puts all of those books into a single volume.  Only after buying it, you find that there are thirteen books in the collection, not ten.  Somehow you missed a couple of titles along the way.  And these aren't filler titles, either.  The new books are just as good as the ones you've been re-reading for the last two decades.  That would be pretty cool, right? 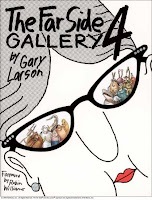 That's exactly what happened to me, only it happened with a cartoonist instead of an author.  For a well-rounded but admittedly geeky child growing up in 1980's Davis County, "The Far Side" was the ideal comic.  Gary Larson's single-panel saga was a perfect storm of zany off-the-wall drawings and oddball intellectual humor.  For years I drew inspiration from his work, and even penned my own knock-off comic in high school.  Then Larson retired in 1995*, leaving me with a wealth of well-worn Far Side Gallery collections on my shelf as a slapstick reference guide for the ages.

Then a few Christmases back, my parents got me The Complete Far Side, a massive two-volume hardbound collection to replace the paperback Galleries that were decomposing on my shelves.  When I heard the set was available, I knew I had to have it.  But little did I know that the Galleries I already had only included about two-thirds of the original comics.  When I browsed through those hardbound moniliths on Christmas morning and discovered dozens of unfamiliar comics mixed in with my favorites, I was like a little kid who had discovered boogers for the first time.

Last weekend Gary Larson made a cameo appearance on a new episode of "The Simpsons," and reminded me of what an influence my dad has been in my life.  See, I only got into "The Far Side" after my dad spent years putting Far Side calendars on his Christmas wish list.  As a microbiologist, my lab coat clad dad was an even more ideal audience for Larson than I was.  He was one of those guys who always had Far Side comics stuck on his lab door.  He was probably also one of the few people who was smart enough to understand all of Larson's jokes. 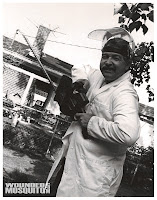 I think Dad always assumed that his background as a scientist would be passed on to his son.  It's probably been sobering for him to see that it was his sense of humor that was passed on instead.  That may have been why I had him pose in his lab coat for a portrait I shot for a class assignment, years before photography became anything close to a serious interest for me.  Actually, back in the day, my dad was really into photography, too.  Guess that's another thing I must have picked up from him.

This weekend is my dad's birthday, and as part of the festivities, last night we swung down to the arena to see the Jazz play LeBron James and the Cavs.  That's another of our traditions.  We've been going to Jazz games since Stockton hit that layup over Jordan to cap an 8-point 40 second comeback in the Salt Palace.  Considering the outcome of last night's game**, I'd say it's a pretty good tradition.

I spend a lot of space on this blog whining about my gripes with life.  In the interest of offering a little good old Fox News fair and balanced objectivity, let me just say that I've been spoiled in the parent department.