The Circle of Jazz 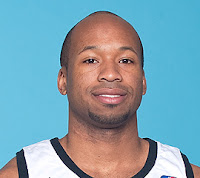 In twenty-five years of watching the Utah Jazz, few moments have matched the thrill of seeing Sundiata Gaines hit a walk-off three-pointer over King James and his subjects on tail end of his temp contract.  It's hard to say where the moment will rank on the all-time list, or even if Yada will still be with the team by the end of the season, but as I stood high in the upper bowl with my dad last Thursday, I knew I had witnessed something special.  As of right now, here are my top ten favorite Jazz moments, arranged chronologically:

I will never forget the first time I met Karl Malone.  It was during his rookie year at the Highway 89 McDonald's in Bountiful.  Karl had been sent out there to sign autographs, and we found him sitting by himself in the corner of the old outdoor Playland, waiting behind a folding table with a stack of glossy black and white photographs.  There wasn't a publicity rep or a press agent to be found, just a skinny early version of the Mailman with nothing to do but write "To ____, Karl 'The Mailman' Malone, #32, Utah Jazz" over and over on as many photos as you wanted.  It is the memory of Karl I remember the fondest.

I'd been watching Jazz games off and on for a few years by the time we squared off with the Lakers in the second round of the '87-'88 playoffs, but it was only after that series that I officially became a Jazz fan.  It was a classic David vs. Goliath match, and even coach Frank Layden was famously candid about his lack of faith in his team's chances.  That's part of what made it so sweet when the stubborn Jazz dragged the series out to a full seven games before finally giving up the ghost.  As much as I loved the slow TV pan of the dejected Laker bench during the closing minutes of a Jazz blowout win in Game Six, my favorite memory of the series was packing into the back of a Chevy van with fifteen other guys, crowding around a fuzzy 15-inch television watching the live broadcast of an earlier win during our ward's Fathers and Sons outing in Camp Zarahemla.

Like most people last Thursday, I pretty much figured the game was over once the Jazz trailed by six with just over 30 seconds to play.  But I couldn't quite bring myself to leave, because twenty years earlier my dad and I had been in a similar position at the Salt Palace.  Back then the Jazz had also fallen into a hole late in a heated contest against a superstar-led squad: Michael Jordan and his pre-title Bulls.  With forty seconds to play, the Jazz trailed by eight, and during a time-out the silence of the stunned crowd was broken by a single fan who called out, "you blew it, Jazz!"  Forty seconds later, John Stockton hit a driving layup over His Airness for the win.

During the two summers following my eighth and ninth grade years, I attended Karl Malone's official basketball camp up at Bountiful High School.  For a one-week period, you were teamed up with a dozen other kids your age and run through a series of drills and scrimmages, enjoying a number of guest speakers and even a camp-wide Slam Dunk Contest along the way.  Each "team" was assigned a coach, usually someone connected to one of the local universities or some other basketball-related organization.  The summer after my ninth grade year, though, I drew Jazz backup point guard Delaney Rudd.  Rudd only spent a few seasons in the league, but it was great to spend time with someone who was talented enough to play pro ball, yet humble enough to know how fortunate he was.  One afternoon he told us all the story of when he got the call to play for the Jazz, how he was so thrilled he did a back flip on his hotel bed.  He's been one of my favorite players ever since.

One of the perks of playing in the Junior Jazz basketball league was getting a complimentary ticket to a Jazz game.  For the previous three years, while attending Centerville Junior High, I drew tickets to predictable bottom-feeder contests against expansion teams like Miami and Charlotte.  But during my first year at Viewmont High, after switching over to the Bountiful league, I nabbed a ticket to this epic clash between the Jazz and the Bulls.  Michael Jordan and his buddies were coming off their first title, and it would be another five years before the Jazz would face him in the '97 Finals, but this game offered a glimpse of the battles that were to come.

In the spring of 1998 my mom got a couple of luxury suite tickets to see (insert current name of Salt Lake minor league baseball team here) play a game at (insert current name of ballpark on 13th South here).  Since she wasn't a big baseball fan, she gave me the tickets, and I went to the game with a buddy of mine.  A couple of innings into the baseball game, the Jazz started Game 5 of their first round series with Houston, and we went inside the suite and started watching the basketball game on the TV.  About two-and-a-half hours later, during a late timeout in the Jazz game, we stepped outside to see what was going on in the ballpark.  The entire place was empty save for the row of luxury suites, where all the lights were still on from the people who were watching the Jazz game on TV.

By the spring of 2000, no one wanted to admit it, but the window for a Stockton/Malone title was closing.  Shooting Guard Jeff Hornacek in particular was pretty much playing on one leg.  When the team went down 2-0 in the second round against Portland, I bought a ticket to Game 3, figuring if the Jazz were going to take one game in the series, it would be that one.  I'll never forget the fight that Hornacek put up that night, scoring 24 points almost out of pure defiance, even though he was giving up several inches, pounds and years to the two bruisers Portland was clobbering him with.  The Jazz struggled all night, but there was one brief stretch in the third quarter when a little of the old magic came back, and it felt like we might have a chance of pulling out a victory.  We wound up losing the game, but I left the arena that night with a profound respect for #14.  He retired after that season, and even though John and Karl stuck around for a couple more years, to me the Stockton to Malone Era ended that night at the Delta Center.

I always figured I'd stop following the NBA once Stockton and Malone retired, but as it turned out, the 2003-04 season was one of my favorite memories as a Jazz fan.  The all-knowing media predicted disaster in the wake of Stockton's retirement and Karl's defection to LA, but instead of setting the record for worst team of all time, the '03-04 Jazz finished 42-40 and only barely missed the playoffs.  In classic fashion, the rag-tag bunch of misfits, led by a spiky haired Russian named Andrei and a platoon of point guards named Raul, Carlos and Mo fought every game in the knowledge that anything less than their best effort would result in disaster.  I went to a handful of games that season thanks to a ticket package we got my dad for Christmas, which also happened to include the game where Karl returned to the Delta Center with a legally-entangled Kobe.  I booed them both lustily, of course, and the Jazz won.

After a three-season rebuilding project, the Jazz returned to the playoffs following the 2006-07 season, led by point guard of the future Deron Williams.  It was also the first season I was a season ticket holder, having gone in with a couple of co-workers from USU who couldn't say no to the bargain basement deal Larry Miller was offering up in the upper bowl.  After a knock-down, drag-out seven game first round series with the Houston Rockets, we welcomed the Golden State Warriors for round two, fresh off eliminating the number one seeded Dallas Mavericks.  I missed the classic game when Derek Fisher flew back from New York in time to hit his legendary three-pointer, but I was in attendance for Game 5 when we clinched the series and qualified for the conference finals.  As everyone poured into the streets after the victory, the area swarmed with people honking their horns, cheering and carrying on like we'd been liberated from Nazi occupation.  As I was walking north on 400 West, I remember one guy who was so overcome with joy that he walked out into the road and stood dancing in the headlights of the bewildered pickup driver who had slammed on his brakes in confusion.

I'm hesitant to get too carried away in comparing this game to the comeback over the Bulls in '89, because I've been known to be premature in the past.  After all, in the wake of seeing "U-571" for the first time, I declared it to be superior to "The Hunt for Red October."  But wherever last Thursday's game winds up on the all-time list, there is no doubt that it belongs in the mix.  And as fun as it must have been to see on TV, there is no way it could possibly compare to the experience of being there in person.  The dramatic swings of being down-12 to being up-13 to watching helplessly as LeBron James steamrolled the home team on behalf of every superstar that you know would never consider playing for the Jazz were completely astounding.  And even after personally attending the Jazz-Bulls comeback, it still took a couple of seconds after Sundiata Gaines hit his miracle three and all the confetti and streamers burst from the rafters before I realized that what had happened was all real.  Best of all, with my dad there next to me, it made the whole thing feel like it had come full-circle.

Naturally, the more I thought about this list the more memories came to mind.  There were a few omissions that were hard to make, and as hard as it is to justify placing another memory of a Jazz loss on my top memories list, it's harder to let this one slip entirely.  Sadly, I never got to see Stockton's iconic three over Charles Barkley to send the Jazz to the Finals for the first time, because as irony would have it I was serving as a missionary in Chicago for the Church of Jesus Christ of Latter-day Saints from 1995-97.  That made things especially interesting while the Jazz and Bulls were duking it out for the first time, particularly in light of Rodman's noted fondness for Mormons.  Though I couldn't see any of the games, I did get a special vantage point for one unique event.  The night the Bulls clinched the title in '97, my companion and I were riding our bikes home along 79th Street on Chicago's South Side.  The night was eerily quiet, and the only thing moving underneath the silent streetlights were the cops who were gathering on street corners in full riot gear, bracing for the inevitable victory "celebration" that was to come.  I think that single image may have defined my experience on the South Side more than any other.
Posted by The Professor at 11:54 AM