Sometimes it's hard to put your heart into a new relationship when you're still struggling to let another one go. Even if you know that things will never be the same between you, hope dies hard, and it can take a toll on any of your future efforts until you find closure.

I'm talking about cars, of course.

Four years ago I begrudgingly traded in my 1996 Nissan Maxima. We'd been together for over five years, and had logged nearly 100,000 miles together, back and forth to Vegas, to Yellowstone, all over, really. I don't know how many dates I went on in it, or how many times I dropped her into 4th gear, changed lanes and blew past someone on the freeway. We had some good times.

It was my longest relationship in a long history of memorable auto-owner partnerships. Before the Maxima there was the '64 Mustang, the '63 Dodge, and of course, my first ride, the '83 Honda, the Bluesmobile. I had some good times in those cars too, but none of them could boast the longevity of the Maxima. 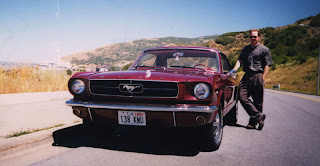 Still, after five and a half years of V-6 powered cruising up and down the Wasatch Front, time took a toll on my beloved Nissan. After tolling up two grand worth of repair bills in less than six months, I knew it was time to move on. I hated to do it, but I knew it was the right thing to do. That's how I wound up over at Rand's Auto Sales in November of 2005, trading in my Maxima for a black 2002 Honda Accord Coupe.

At first I tried to tell myself I was getting a great deal, upgrading to a car with a leather interior and a paint job that finally fit my personality. I even tried calling it The Batmobile in the hopes of forging a quick bond. I tried to look to the future with optimism, but deep down I knew I was having trouble letting go. Trouble that reared its ugly head every time I tried to downshift and gun the engine only to be reminded that a four-cylinder Honda can't jump like a six-cylinder Nissan.

For nearly four years I've cursed the Accord for its performance shortcomings, chafing with frustration because it seems so absurd to be ungrateful for a car that otherwise boasts so many luxuries. But all I saw were the weaknesses, and as a result our relationship has been alienated, strained at best. Only the specter of the '88 Prelude carries a more woeful ranking in my automotive past.

But somewhere along the Pacific Coast Highway, all that changed. Maybe it was while I was looking past a hazy shore at an ocean sunset, or while I was trying to stretch out in the passenger seat and get some sleep in Big Sur State Park, but at some point along my 2,500 mile journey, I made peace with my Honda. It doesn't move any faster, doesn't respond any quicker, and the plastic front bumper still pops out of its clips on the right side every once in a while. But the car just feels different. We've gone places together now. We have history. We've blown across Nevada deserts, up coastal highways, and wandered through the Haight-Ashbury District in San Francisco. We've looked up at the stars in Big Sur and wove through the Redwood forests of Northern California. We just crossed her 100,000 mile mark together, and even though it would be nice to pick up a new ride with a bigger engine and all sorts of new features, I think I'll be OK for a little while longer. For the first time, I think I may be ready to let the Maxima go and make a serious commitment to my Accord.

Either that, or I really need to start dating. 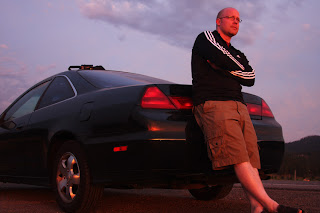 Posted by The Professor at 9:02 AM