This weekend John Stockton is going to be inducted into the Basketball Hall of Fame. So is Michael Jordan. Seems about right.

When I was a kid, Jordan was the player I wanted to be, but Stockton was the player I was in reality. Jordan was the high-flying aesthetically-stunning highlight machine with the awesome shoes and endless line of posters. Stockton was the quiet white kid who played hard-nosed defense with a chip on his shoulder. At the end of my first year of Jr. Jazz basketball, we had a team party and had to vote each other some kind of honorary award. I was only the second-worst kid on the team, so I managed to avoid the "best effort" award. Instead, I got "best passer," which was appropriate since my only move that year was to dribble from the free throw line down to the right side of the key, then stop and look around for someone to throw the ball to.

I knew "best passer" was a cop-out, but I took it to heart and started to emulate Stockton as I began to grow into a decent ballplayer. I may have been drawing pictures of Jordan in art class and wearing his trademark GRID knee brace during games, but anyone who watched me play saw a kid who excelled at the scrappy stuff: nagging defense, pickpocket steals, quick passes. Like Stockton, I was a little guy who got off fighting the big guys.

One summer at the end of Karl Malone's basketball camp I came face-to-face with my mentor. Stockton came as a special guest speaker, speaking from a small clearing in the middle of 500 of my peers as we stared at him wide-eyed in our white sponsor-covered camp T-shirts. After chatting us up for a bit, he started calling up volunteers for a dribbling drill. My arm shot up like a rocket, but by the time he wandered to my end of the crowd, he already had a dozen eager players ready to go.

"OK," he said as he strolled in my direction, eyes scanning the campers. "Let's get a girl or two in this group."

A bunch of disappointed hands dropped. Mine stayed up. Screw it, I thought, this is John Stockton. I'm not giving up that easy.

Stock looked me square in the eye.

I smirked and put my hand down. Had to try, right?

Apparently Stockton connected with my dogged determination, because he tabbed me for the next drill. My only regret was that I had chosen to wear an older pair of bermuda shorts that day in camp, a notably hideous purple pair covered in outer space symbols and astronauts. They were also too small, which seems kind of appropriate given the circumstances. 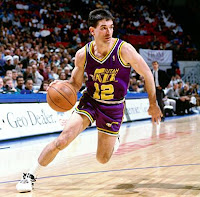 I never got to see Stock hit the shot against Houston that took the Jazz to the Finals for the first time in the summer of 1997. Ironically, I was riding a Trek 820 through the streets of South Chicago at the time. But I do remember seeing him hit a driving layup over Jordan back in 1990 to cap an 8-point 40 second comeback at the Salt Palace. I do remember seeing him throw the assist that gave him his first season record. I even remember seeing him come off the bench to spell Rickey Green, back when Hot Rod was still calling him "Little John."

As he gets ready for his induction in to the Hall of Fame, he may be slipping in under Jordan's shadow, but the evidence of his influence still shows up every time I step on a court. I may share Jordan's hairline, but all my former high-flying high-scoring aspirations were retired a long time ago. Anything I've got left, any pass, any pick, comes exclusively from the Stockton Playbook.
Posted by The Professor at 10:57 AM