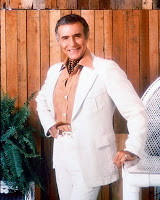 Last year we lost Paul Newman, one of the classiest actors Hollywood ever produced. Today, we lost his Latin equivalent. If there was ever a guy who could quote Melville on the bridge of a starship that was about to explode, and totally get away with it, it was Ricardo Montalban.

Montalban was the consummate Latin Lover, starring in all sorts of films throughout the 50's and 60's, but he became an icon through his roles as Mr. Roarke in "Fantasy Island" and as Captain Kirk's greatest nemesis, Khan Noonian Singh, in "Star Trek II: The Wrath of Khan". If you ask most Trekkies, they will agree that "Wrath of Khan" was easily the best of the Star Trek movies, and I still think that it's the one film in the series that people who aren't Trekkies would still enjoy.

And the reason is Montalban.

Montalban got into his Khan character the same way Heath Ledger got into The Joker last year in "Dark Knight", and both wound up stealing the show from each film's respective hero. Fortunately, Montalban didn't share Ledger's substance abuse problems, and was able to make it to 88 before he passed away.

"Wrath of Khan" was actually an extension of a narrative from one of the original TV series plots, an episode called "Space Seed", where Kirk and Co. discover a ship full of super-humans who had been in suspended animation since they fled Earth 300 years earlier. Khan is their leader, and when Kirk wakes them all up, he tries to overthrow the Enterprise. By the end of the episode, Kirk manages to capture the whole cult and maroon them on an uninhabited planet to start a new life. At the beginning of the movie, which takes place fifteen years later, Khan and his posse get loose on another ship that comes along, and Mr. Montalban spends two hours going ape-sh@# trying to get his revenge.

It's a great movie. I highly recommend it. 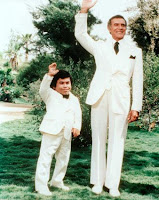 Montalban actually holds a dear place in my heart, and not just because he played a great bad guy. During my first semester in grad school, I was taking a course that had us reading all sorts of books on Chicano Nationalism, which is essentially a political movement based around the idea that the western United States will ultimately be retaken as part of the original Mexican homeland (referred to as Aztlan). Our final project for the class was to write a conference paper on some aspect of the issue, and somehow I convinced my professor to let me write my paper on Montalban, since he'd been fairly outspoken on Latino-Caucasian relations in the west.

At first I just thought it was funny that I was getting away with writing a serious academic paper on the guy who played Khan in an old Star Trek movie, but the more I learned about him, the more I became impressed with Montalban's character. He was a very passionate man who cared deeply for his people and his community, but his approach to his cause was not angry or combative, and I really admired his clear-thinking, down-to-earth views.

Of course I still spent a lot of the paper talking about Star Trek. I even tried to use a clip from the movie when I presented my paper at the end of the semester, but the DVD player wouldn't work. (If anyone is actually interested in reading a 15-page paper about Ricardo Montalban and his relationship to the Chicano Movement, you can find it here).

After finishing the project, I always intended to contact him or his organization and at least express my appreciation for his work. He really seemed like a class act, and I thought that he might appreciate what I had written about him. But sadly, I never did, and I suppose it's too late now.

At least I've still got "Wrath of Khan" on DVD. I've always thought it would be a worthy choice for a "Movie Night". Maybe now is the appropriate time.
Posted by The Professor at 3:14 PM