Ballad of the I-70 Soul Soldiers

At 6:15am I rolled out of Orem in a 2006 Jeep Cherokee with my buddy Fabian, two nannies from Salt Lake, and Senator Bob Bennett's great-nephew. Our plan was simple: take a straight shot into Colorado, hit the Killers concert at Denver University that night, and get the senator's nephew out to DC in time for the Obama inauguration. And so in the heavy black of a January morning we cruised out of Utah County to the sound of Led Zeppelin's "Dazed and Confused", armed with four dozen rice krispy treats, two dozen bottles of vitamin water, two bags of Cheetos, some dried mangoes from Costco, and a track list of 25,000 songs from our five iPods.

For the first hour we wound down the perilous treachery of Highway 6 in total darkness, then somewhere south of Price the sun began to shine through the waves of fog that rolled across the frozen eastern Utah tundra while Johnny Cash blared "Sam Hall" through the stereo. As the fog thinned the sunlight blazed more and more intently through the front windshield until it felt like we were driving straight into the presence of God Himself. By the time we made the Colorado border, the fog finally fell behind, and we spent the next five hours winding our way over, around, and through the Rocky Mountains as I improvised a playlist that took us from AC/DC to The Clash to the Beatles in half a dozen moves. Then Tyler the Senator's Great-Nephew took over and served up a round of Killers tracks to warm us up for the evenings' big event. 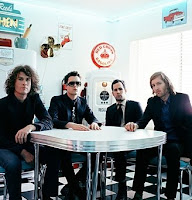 As attractive as the concert was, we were hardly a pack of Killer diehards. Fans, yes, but only Tyler seemed to know the in's and out's of the complete Killer catalog. For the rest of us, the trip was a perfect excuse to get out of Dodge for a couple of days that happened to feature a great show right in the middle of it. For me in particular, it was a weekend away from unemployment, inversion, and the belabored process of integrating into my new family ward. And with gas prices as low as they've been for the last couple of months, there was no reason to think a quick road trip could be a bad idea.

Thanks to our early run out of Utah County, we checked into our yellow-bricked crash pad at La Quinta Inn with plenty of time to unload our gear, take a nap, and fill up on the all-you-can-eat pizza buffet at Beau Joe's before showtime. Beau Joe's was a local pizzeria chain whose claim to fame was their authentic Colorado-style pizza, which as far as we could tell just meant you put honey on the crust before you ate it.

The concert itself took place in the heart of the DU campus at Magness Arena, a mid-range venue that held somewhere in the neighborhood of 10,000 screaming twenty-something fans and 2,000 slightly less jubilant fans aged 30-65. Since they'd picked up their tickets three weeks in advance, my comrades landed right smack in the middle of the general admission crowd, five feet off the front rail in direct view of Brandon Flowers' keyboards. I picked up a solo ticket off eBay, which wound up just off stage right on the second row off the floor, at eye level with the musicians. 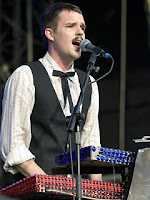 Shortly after 8pm M83 emerged from offstage and churned out a half-hour of opening tracks, heavy on the drums and synthesizer, and light on vocals. Their style clearly echoed the influence of the main act, and without the Killers' passionate vocals, they sounded almost like a half-hour overture to the evening's showcase. Then as the clock spun towards 9:30 the Killers finally took the stage in front of a wall of light, and the arena jumped to life as they blasted "Spaceman" through the tiny arena. Flowers zipped back and forth on the stage, hopping up on the monitor speakers to egg on the crowd as the band churned through three albums' worth of epic anthemic angst, from "For Reasons Unknown" to "Somebody Told Me" to "Human", with plenty of other hits in-between. Each song was a barrage of Spector-like synthesized Wall of Sound, anchored by rock-solid bass from Mark Stoermer and a flurry of backbeat hammering from drummer Ronnie Vannucci, Jr., who had the presence of mind to mount a fan behind his kit so his hair would blow while he played.

Over on my end, Dave Keuning rotated through a series of Gibsons and Fenders while laying down his assorted lead guitar licks, all the time looking like the one member of the band most likely to fill in for Bon Jovi in a pinch.

The arena pulsed and cheered for every track, but we saved our best response for the most grandiose of the Killers catalogue, "Mr. Brightside" and the set-capper, "All These Things That I Have Done". The finale showered the crowd with confetti and left us wondering what else they could possibly do to top the show, then the band reappeared and blasted out "Dustland Fairytale", "Jenny Was a Friend of Mine" and "When You Were Young" to hammer the final nail into the evening. Like U2 and Coldplay and so many other arena bands before them, the Killers connected with the crowd through their music and their message. Far from simple angst, the lyrics captured not only the passion of youth, but the frustration of being older than you deserve to be.

Once the initial buzz passed and we'd knocked down a late-night meal at a surprisingly hip and well-decorated Village Inn, we got Tyler the Senator's Great-Nephew out to the airport on time for his flight, then crashed for a few hours before taking in a local Sacrament service and heading back out on the road for our return trip. In spite of a little fog and a little cold, the highways greeted us with clear asphalt the whole way, a massive stroke of fortune given the timing of our weekend journey. Six hours later as I steered the Jeep west along I-70 towards the Green River junction, the setting sun once again blazed over the snow-capped ripples of Southern Utah, giving the distant peaks a pink glow as Nick Drake lulled out "Northern Sky" through the stereo, and I remembered once again that sometimes the best way to get out of a funk is to get out on the open road.
Posted by The Professor at 1:39 AM