I really love this whole retro thing Nike has been doing for the last few years. It’s been cool picking the classic basketball shoes I couldn’t afford in junior high. It’s got me thinking: there are a lot of things from my childhood I wish were still around. Things I think should be retro’ed.

Here are my top choices:

In summers during the mid-80’s, my family spent a lot of Friday and Saturday nights out at the Redwood Drive-In off 33rd South and Redwood Road. The four of us would roll in in our ’83 Honda, packing an assortment of snacks and drinks, and kick back for a double-feature. Saw “Ghostbusters” this way…”Tron”, “Star Trek III”, “Back to the Future”. Lots of great stuff.

Without fail, there were always two critical items for a trip to the Drive-In. The first was red Twizzlers (sorry, not a Red-Vines guy; they taste like wax). The second was a big blue box of Mr. Salty Pretzel Twists. Mr. Salty, as you might imagine, was the total antithesis of today’s wave of low sodium, low fat pretzel. Which may be why Nabisco discontinued the line several years ago. Which is also why they should bring it back now. After all, the Redwood survived, why can’t Mr. Salty? 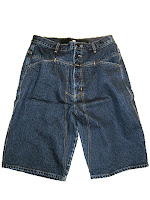 Somewhere in the transition between elementary school and junior high it became important to wear clothing that didn’t have a direct connection to your favorite football player or basketball team. It also became completely acceptable to spend lots of money for said clothing. Guess jeans were the first “name” wave, with the cute little inverted triangle on the butt, but by the eighth grade Girbaud was the brand of choice at Centerville Junior High, to the tune of $74 a pair. I thought the jeans were cool (they had this strange side pocket along with their trademark X-brand front pockets that slanted up towards a logo patch on the fly), but my favorites were the shorts ($53), which still had the slanted pockets, but just felt a lot more comfortable.

(Editor’s Note: Girbaud X-Brand Shorts are hereby disqualified from the list. Why? Because YOU CAN STILL BUY THEM AT THIS SITE! Who knew? They still cost fifty bucks! Life is beautiful!) 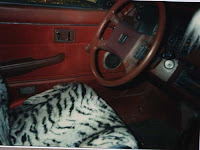 Not only was our family Honda a fixture in my Drive-In memories, it also happened to be my first car when I turned 16. When my parents picked up a new ’92 Accord, I inherited our old maroon four door, quickly slung a Rolling Stones tongue air refreshener around the rear-view mirror, dubbed it "The Bluesmobile", and set about three years of cruising, dating and parading until I left for my mission to Chicago in the Fall of 1995. The ’83 Accord has no guts, but it was quick; it handled well, and it was fun to drive. Plus I put fluffy white tiger seat covers on it. After a couple of road trips to Yellowstone, a couple of traffic tickets, and about 30,000 miles, I returned the keys to my parents. They sold it three months into my mission for $1500.

Around the time George Lucas started getting ready to release all the Star Wars prequels, old Star Wars toys like the Millenium Falcon and the X-Wing Fighter started showing up in toy stores. I was elated, of course. My idea at the time was that I would buy up an entire line of the toys, then save them for my own kids so they could grow up with the proper influence. Didn’t happen. But in spite of all the original toys that got the retro release, one that didn’t get the treatment was the original Death Star Playset. 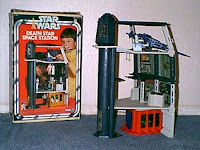 The Death Star Playset was a four-level tower that featured elements of the Death Star scenes from “A New Hope”. There was a gun station on the top, a retracting bridge level to swing Luke and Leia across, and a regular floor below that that featured a trapdoor leading to the trash compactor (complete with foam garbage and a rubber trash monster). They even had a little post where Obi-Wan could go disable the tractor beam. I was the only kid I knew who ever had the Death Star Playset. I never even saw it for sale anywhere else. I don’t know why. I couldn’t keep the thing together—eventually all I had left was the tractor beam station and the gun from the top floor that I used as a blaster since my parent’s didn’t feel good about buying me toy guns. It would be cool to see one again now. Even looking at the set in pictures brings back a lot of memories.

I’m still holding out hope that one day “The Wonder Years” will be released on DVD; it’s just a matter of legal issues and all. Besides, you can pretty much get all the episodes in downgraded quality off the Net anyway. “Sledge Hammer” is already on DVD (both seasons!), and clips from “Spitting Image” are all over YouTube, but I fear that one of my childhood favorites is just too obscure to ever see the light of DV-Day: “Misfits of Science.” 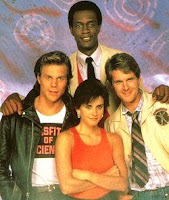 “Misfits of Science” lasted about one season, from late ’85 to early ’86, and told the story of a group of “X-Men” types that had super-powers but no colorful tights. There was the really tall black guy that could shrink, the cool guy in the shades that could control electricity (not to mention play a mean guitar), and the super-cute brunette that could move stuff with her mind (she even redirected sprinklers one time, if my memory serves me). Best part? The brunette was none other than Courtney Cox.

I hate expensive upright vacuums. They never work. At least they don’t with me. They’re like computer printers and windshield wipers; they have a pretty simple function, but they hate me, and conspire against me.

But there is one vacuum that has never let me down. It’s a little puke-green box GE my parents bought long before I was born. Actually, it looks old enough that builders may have unearthed it from the ground while pouring the foundation of my families’ house. Regardless, that little baby is the most consistent vacuum I’ve ever used, and at the risk of jinxing the whole thing, it still runs today.

Back before the construction of the LDS Conference Center on the northwest corner of Main Street and North Temple, there used to be an old gym that provided one of the only places in town you could go for a pickup basketball game without having to know someone with a church key. They also had weight rooms, pools, a lengthy running track, and lots of other stuff. I was so impressed with the place I took a date there. (Insert your own “that was obviously a good idea” joke here).

The way I figure it, I passed the swim test for my Sports Merit Badge somewhere around the little theater stage where they perform “Savior of the World” every holiday season. I dig the Conference Center and all, but I really do miss Deseret Gym. I miss it every time I open up the doors to a church social hall and see a Relief Society function going on.

To be quite honest, there are a lot of advantages to not having hair. For one, it has been about five years since I had to get out of bed and worry about how I looked before I ran out the door. It’s been at least that long since I had to pay for a haircut. Plus people have told me on multiple occasions that I have a well-shaped skull, and thus can pull off the shaved head look. Granted, I realize that getting compliments like that is kind of weird, but since they are offered voluntarily, I assume they are sincere, and I also happen to agree: I have a well-shaped skull. 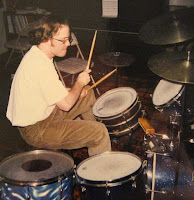 At the same time, if only for creative purposes, I would definitely like my hair back. Sometimes I want to grow my hair out long again like I did during a six-month window after the mission. Sometimes I want it back so I can cut it into a Mohawk and show everyone what one really looks like (the Faux-hawk trend makes me think about that scripture about being lukewarm). Other times I want it back so I don’t have to worry about sunburning the top of my dome in the summer. Because that really, really blows. 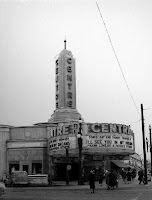 Another childhood landmark in Salt Lake is the old Centre Theater, which used to be on the corner of 300 South and State Street. It was a classic old-style one-screen theater that had a big wrap around marquee and lots of red velvet inside. I saw “Return of the Jedi” there a dozen times with my mom during the summer of 1983 (when the famous “State Street River” wasn’t running in front of it, that is—anyone else remember the ’83 floods?). Back in the late 80’s/early 90’s the place was torn down and replaced by a big office tower and multiplex, only it was before multiplexes had stadium seating and decent sound systems, so essentially what you have there now is a dollar theater that specializes in art house films (The Broadway Center). Yeech.

I was about eight or nine years old when my family got cable. We were one of the only families on the block that had it, so I had the distinction of being the only kid who could watch the “M.A.S.K.” cartoon on WGN on weekdays after school, or see all those Canadian kids on “You Can’t Do That on Television” on Nickelodeon. Back then Nickelodeon also had a special lineup in the evenings—“Nick-at-Nite”—that featured re-runs of a lot of old classic TV shows from the 50’s and 60’s, like “My Three Sons” and “Mr. Ed”. I wasn’t all that interested in most of them, but that one about the perfect girl-next-door surfing brunette teenager that was always jabbering about her Moon-Doogie? Yeah, I dug that one.

Back in the year before I left for Chicago, I had a friend at my ward who worked as an event manager for the Delta Center. Every once in a while he’d call me up and tell me to grab a friend or two, and we’d go set up chairs for a concert. We’d make about fifty bucks and get to see the concert for free. That’s how I saw ZZ Top and Phil Collins. (That’s also how I ran into the ZZ Top girls, which is a strange thing to do with a member of your bishopric).

In the spring of ’95, my friend called me up and told me the Grateful Dead were playing a pair of shows over the weekend, and wanted to have me come by. But I was working at a music store at the time, and was already booked. Besides, I wasn’t really a huge Dead fan anyway, and only appreciated them because my creative writing teacher had been a Deadhead for seven years before getting into his Master’s program at the University of Utah. So I passed.

That summer Jerry Garcia died.
Posted by The Professor at 6:04 PM