As much as I resent Kobe and Mr. Zen, the two of them are more symptoms than causes. My hatred of the Lakers extends far beyond the two of them, long before Kobe was launching air balls against the Jazz in the Western Conference Semi's in ‘97, long before the Zen Master was even coasting to titles with MJ and the Bulls. I trace my Laker-Hatred back to the spring of 1988. 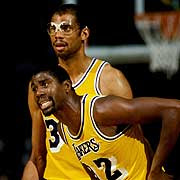 Longtime Jazz fans don’t need to be reminded about the spring of 1988. That was the year we turned the corner. After dispatching the Portland Trail Blazers in the first round of the playoffs, we ran headlong into the defending NBA champions. No one gave us a chance against the Lakers, even our coach, Frank Layden, who was in his last full year at the Jazz helm before Jerry Sloan took over. Most people figured we’d get eliminated in four games, five at best.

Instead, Stockton and Malone introduced themselves to the league courtesy of an epic grudge match that only subsided when the Jazz ran out of gas in Game 7 on the floor of the “Fabulous Forum”. The no-name Jazz became the no-name Jazz That Could. And die-hard Jazz fans became certified Laker-Haters.

That was the year I made my full transition between “Adolescent Han Solo” Josh and “Pre-pubescent Wanna-Be Jock” Josh. Transformers were exchanged for basketball shoes. Afternoon cartoons were replaced with pick-up football games. And Darth Vader was replaced with Earvin “Magic” Johnson. 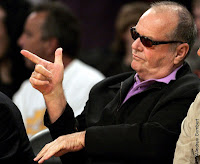 Actually, it wasn’t Magic that I hated. It was what he represented. As a geeky kid who had the nerve to dabble in the world of jocks, the Jazz vs. the Lakers came to embody everything I felt and identified with in terms of life’s underdogs. The Jazz were the hometown team, the humble guys, the hard-working stiffs who didn’t get any respect. The Lakers were “Showtime”, the team many of my spineless peers got behind because it’s always easy to get behind a winner. They were the popular crowd, the team that had Hollywood celebrities show up on the sidelines at Forum games “to be seen”. At least Jack Nicholson kept his season tickets in the bad years. They were the only team in the NBA that didn’t wear white jerseys at home—which would have been cool if they hadn’t gone with that prissy yellow instead. They were the team that had the Fabulous Laker Girls, who were symbolic of the unattainable girls at school who wouldn’t give me the time of day. The Lakers were the elite, and the Jazz were the uncool.

I should admit here that later in junior high I became a pretty serious Bulls fan. I admit that freely. I admit it because even as I bought Michael Jordan T-Shirts and wore my black GRID knee brace just below my knee cap like he did, I never cheered for Chicago when they played the Jazz. I knew, even as an insecure pre-teen, where my true loyalties lay.

But I never had any conflict with the Lakers. I relished every opportunity we had to beat them. And that ‘88 series provided multiple opportunities. One of the first Jazz wins in that round happened on the same night as the annual Fathers-and-Sons Overnighter in Camp Zarahemla. My lingering memory of that excursion was being crammed in the back of a Chevy Van with ten other guys around a 10-inch TV, watching Stockton and Malone beat Magic and Kareem. Later I loved the slow pan of the Laker bench at the end of Game 6, when the Jazz had so totally obliterated Showtime that by the tail end of the fourth their starters were lined up on folding chairs looking like they were waiting for a firing squad. I loved seeing national announcers being forced to say nice things about the Jazz, even though you could tell they hated doing it. They still hate doing it.

Then Magic got AIDS, the Lakers went in the tank for a few years, and they weren’t that much fun to hate anymore. You can’t hate a loser for too long. After a while they just become Vince Carter. But a winner, well…let’s just say I’m glad that Kobe and Shaq wound up in Hollywood.

So Brad Rock is pretty close to right on when he suggests that Utahn’s hate the Lakers because of envy, but I think it goes deeper than that. If there is any community in the United States that has become accustomed to circling the wagons, it’s Utah. We’ve got a serious chip on our shoulder when it comes to being a second-fiddle town, whether people are bagging on our lack of nightlife or general weirdness. This whole place was settled by a group of people that were driven out of three previous states…you think we want to take crap from a bully from one of the coasts? When New York or LA comes to town, it’s a chance to punk one of the big guys. 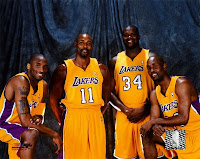 You want to know why else we hate the Lakers? Because Californians keep moving here and telling us about how much better California is…even though THEY MOVED HERE. Then they come to Jazz-Laker games and cheer against our team IN OUR OWN BUILDING. You think we booed Derek Fisher because we think he scammed us? No, we booed Fisher for the same reason we booed the Mailman when he went to La-La Land. BECAUSE HE RETURNED A LAKER, AND WE HATE THE LAKERS. We just got lucky that Kobe and Phil wound up there.

I honestly don’t know how this year’s series is going to turn out. We already lost Game 1, so we can’t repeat the glorious Sweep of ’98, when the Jazz ran Shaq and Kobe out in four straight after one of their forgettable teammates predicted a Laker sweep. I do know one thing, though; when Kobe and Fisher and Zen Master and all the rest walk into Energy Solutions Arena this Friday, with big “Lakers” logos on their chests, they will be marked men. After all, we Utahn’s have nothing better to do.