“It takes a big man to admit when he's wrong. I am NOT a big man.”
-Chevy Chase, "Fletch Lives"

Not too long ago, I posted a short review on this blog that explained why I was not a fan of NBC’s “The Office”. It was very sincere. At the time.

And now I have to rescind it.

Over the last few months, I have periodically wondered if I judged “The Office” too harshly, if maybe I should give the show another chance. There were a number of different reasons why:

1. I have a distinct tendency to reject things that are too popular, simply because they are too popular (“American Idol” does not fall in this category).
2. I respect the opinions of the people who continued to recommend the show.
3. I had only watched one episode.
4. The TV critic for the Deseret News ripped MY show after only watching one episode (our first).

In addition, the one episode I had seen of “The Office” just happened to be the finale of season two, when Jim finally busts a move on Pam. It was a moment that had been building for the entire run of the show, and without the full context of the situation, the stark seriousness of it threw me off.

So a few weeks ago I decided to rent one of the season two DVD’s over at Top Hat and give the show another chance.

My initial concern was that the show was little more than an extension of every movie Christopher Guest makes, which wasn’t a good sign, because as fun as they are, the Guest movies get kind of tiresome after a while. But after watching several episodes, it’s easy to see that “Office” goes well beyond the “let’s make fun of the simple lives of insignificant people”. It actually develops those insignificant people with interesting plot lines and some very, very good writing.

My favorite character so far? Creed. 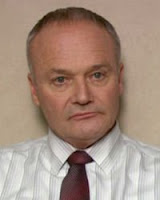 There are a ton of great characters on the show. Jim is easy to relate to. Kevin has a priceless wicked look. Darryl is fantastic. But Creed…Creed’s role is the best: he shows up once, maybe twice an episode, says or does something obscene, and exits. Awesome. He had me from the moment he turned the tables on Michael and abused him into firing someone else at the beginning of season two. He’s the comic doppelganger to “Lost’s” John Locke.

Ironically, the show I initially preferred over “Office” has gone in the tank. I thought “My Name is Earl” was the kind of show that could run forever. I still do. But for some reason, this season the writers decided to chuck everything that made the series cool in the first place to go off on enough wild conceptual tangents as to make the show jump the shark about four times in the first dozen episodes. Sad. It can still be a great show, but someone has to get the thing back on track.

So maybe this whole experience was meant to teach me something about second chances. That forgiveness is a real thing, and that you should never be too judgmental too early. Maybe it’s a metaphor for life, and how if we don’t slow down and take a good look at things, we will miss some great opportunities. Opportunities that could make the difference between a good life and a rich life. 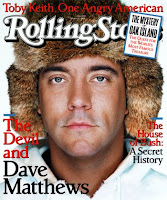 Still, I’m going to miss being the only one of my peers who disliked the show.

At least I still have the Dave Matthews Band.
Posted by The Professor at 10:58 AM