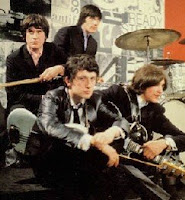 Long before Noel and Liam Gallagher hit it big with Oasis in the 90's (or Charlie and Liam Pace became one-hit wonders with Drive Shaft on "Lost"), Ray and Dave Davies were the prototypical feuding brother British rockers. The Kinks usually get left out of the mix when a conversation of first-tier British Invasion bands takes place. Everyone knows the Beatles, everyone knows The Stones, and most people have heard of The Who, but the circle of life isn't complete without The Kinks.

For those of you who aren't too familiar with Ray and Dave, here is a starter set of excellent tracks. You may be surprised to realize how many of these you already know.

This one never gets any radio airplay, but to me it represents the Kinks better than any other track (and hence is worthy of the Point Guard spot). While the FM dial favors the Kink's hard rockers, this song is much more whimsical, and is the title track for a late 60's concept album of the same name that celebrated the foibles of small-town British life. The lyrics are a lot of fun, advocating a preservation of life's little goodies (strawberry jam, Donald Duck, billiards) with Ray Davies' signature wit. I actually wound up using this album in my graduate thesis on fictional communities.

This one also contains a lot of nostalgic references, but it's much more honest than satirical, and probably one of the most gorgeous melodies lead singer/songwriter Ray Davies ever wrote.

At the same time the Kinks were building a reputation for nasty riff-rockers, they were also building a catalog of what I'd call "dreamy" tunes, lazy melodic tunes that were less about macho bravado and more about pointing out the weary difficulties of day-to-day life or the zaniness of British culture. Far more than The Beatles or The Stones, who focused on topics like love and rebellion, The Kinks actually spent a lot of time singing about being British. "Sunny Afternoon" is perhaps their best-known (and loved) example.

Power Forward: "You Really Got Me"

It kills me that so many people think this is a Van Halen song. Not because I dislike Van Halen--far from it--more because the Kinks' original is so much more raw, honest, and effective. This was the "last chance" track for the Kinks...the song they recorded as their last ditch attempt to make it big after a couple of flop singles. The story goes that in the studio, lead singer Ray was yelling encouragement to his brother Dave during the guitar solo, telling him that this was their last shot at glory. As you can tell, Dave responded.

As huge an anthem as "You Really Got Me" is, "Lola" is perhaps the greatest marriage of the Kinks' riff-power and their wit. Simply put, it is the greatest song ever written about an innocent kid moving to the big city and getting hit on by a transvestite. I can't help but think of Crocodile Dundee in the New York City bar everytime I hear it.

Well I'm not the world's most physical guy,
but when she squeezed me tight,
she nearly broke my spine...

Sixth Man: "All Day and All of the Night"

Some people dismiss this one as little more than a re-hash of "You Really Got Me", and it probably is (if it ain't broke, don't fix it, right?), but there's no denying that it's a great hard-rocking track on its own. So we'll make it the sixth man, eh?

Bench: Nothin' in this World Can Stop Me Worryin' Bout that Girl, Set Me Free, Powerman, A Well Respected Man, I Need You, Holiday
Posted by The Professor at 12:45 PM