Sometimes it's the little triumphs that see you through the dark times...

Last weekend I picked up some snacks/munchies/garbage/junk food to take on the road down to California, not realizing that anything chocolate left in my car longer than 13.5 seconds would soon be relegated to a misshapen mess. Over the course of the first leg of the journey, between Bountiful and Las Vegas, a bag of Deluxe Grahams, a Twix bar and a Three Musketeers bar fell victim to a solar transfiguration experiement.

Convinced that the candy bars were a loss, my sister suggested we cut our losses and chuck the unsightly candy bars. The outer wrappers had been twisted and mangled by the ebb and flow of the melted chocolate inside, resulting in a pair of choco-treats that looked like they may have been cooked up by the inbred family on the old "Home" episode of "X-Files". Even Mulder and Scully wouldn't touch them.

But I would. Rather than give up, I stood firm to my well-ingrained cheapness and demanded that they be spared a trash receptacle grave. I put them back in the food bag and waited until the end of our trip, when I promptly stuck them in my freezer, hoping that the extreme cold would generate the necessary separation of chocolate and outer wrapper. After leaving them overnight, I set them on the counter to return them to room temperature.

Today, while preparing my fifth taco meal in 14 days, I curiously withdrew the Three Musketeers bar and peeled open the wrapper, hoping a generous layer of chocolate would not come stuck to it. Suddenly I found myself holding one of the ugliest candy bars ever known to modern man. But in spite of its ugliness, it was whole. 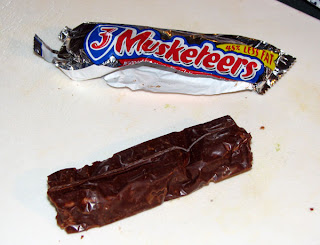 Posted by The Professor at 4:18 PM