What if someone made a "Spiderman" movie and everybody came?

Three films into the series, I have to make it official: I think the action sequences are the weakest part of the “Spiderman” franchises.

Well, maybe not the action sequences themselves…the action is great, though the CGI Spidey does look pretty cartoonish most of the time. No, what I mean is that by the time Spiderman has his final showdown with (insert villain here), the best of the film is past. 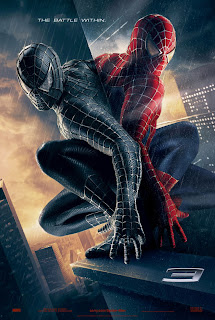 In the first “Spiderman”, I absolutely loved the story of how Peter Parker became Spiderman. Less than an everyman, Parker was the perfect embodiment of the nerdy underdog that so many of us can easily relate to. But once Spiderman squared off against The Green Goblin, the film had turned into any number of generic action flicks, with the usual good-guy-defeats-the-bad-guy climax.

“Spiderman 2” did a better job of blending the action with the storyline, as well as making the third act grudge match a bit more dependent on the overall story. But still, what I remember about the first sequel was the story about Parker learning to balance his life a lot more than his head-to-head with the guide from Raiders of the Lost Ark.

For me, then, the best part of “Spiderman 3” is the sequence halfway through the film when the black oil (on loan from the X-files, I imagine), turns Peter Parker from hero-nerd to hot-head James Brown strutting whack job. Again, the action sequences are great, but when the credits roll they take a backseat to what makes these Spiderman movies work: their personality.

I guess that’s why I have to say I enjoyed the third installment of the trilogy, in spite of the fact that, as many are saying, Sam Raimi tried to cram too much in. “Spiderman 3” feels a lot like one of the “Choose Your Own Adventure” books I read back in the 80’s, only instead of choosing one thread, Raimi put every last one of them in the movie.

Two major pluses for the movie: Daily Bugle Editor-in-Chief Jonah Jameson is still around (one of my roommates claims I remind him of Jameson for some reason), and this time Harry Osborn has more to do than make random bitter interjections about Spiderman killing his dad.

One other negative: For a superhero with a secret identity, Spiderman sure does pull his mask off in public a lot.

Altogether, that’s why I give the movie two and a half stars: the plot may be overloaded, but the Spiderman personality remains intact. And as long as that is the case, I’ll keep coming back.

“Spiderman 3” is rated PG-13 for random action violence, some kissing, at least one moment where you’ll say, “isn’t the blond chick Ron Howard’s daughter?”, and the distinct chance that one of your friends will ask why Spiderman doesn’t shoot his web out of a more naturally correct location.
Posted by The Professor at 2:25 PM