Was it over when the Germans bombed Pearl Harbor?

Last weekend my roommates and I threw a Toga Party. It was a solid affair, with a good turn-out, lots of food, lots of music, a virgin margarita bar, and about a 45% toga to no-toga guest rate.

In a way, it gave closure to an endeavor I started six years ago.

Back in spring of ’01, in those innocent pre-9/11 days when I served as Elder’s Quorum President of the University 32nd Ward, I got this idea about throwing a ward Toga Party. Three years of staid social get-togethers had me bored, and I wanted to show my peers how to really have a good time.

Within reasonable limits, of course. In spite of the decidedly negative image of the Toga Party and the obvious clash that it would create with a ward activity, I opted to assure everyone that the Ward Toga Party would be high on zaniness, and low on immoral content. I even went into the Relief Society and demonstrated how to wear a toga while remaining morally clean. 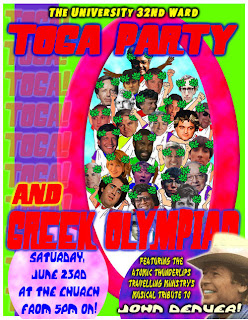 Before long, the event became a bit of a vanity project for me. Getting my peers to show up for a ward activity in bed sheets was not enough, nor was convincing them to tie a bungee cord around their waists and pull a Toyota pickup across the church parking lot as part of our “Feats of Strength” test. No, I chose to use the Toga Party for the debut of my newest garage band, The Atomic Thunderlips Traveling Ministry.

After practicing off and on for several months, Thunderlips had put together a decent repertoire of covers and original songs, from the Ramones’ “The KKK Took My Baby Away” to a Gorditas tribute fused with a Pachelbel piece we called “The Taco Bell Canon.” I was even going to make my lead vocal debut on “Gimme Some Lovin’”.

Late in June, the trucks started showing up at the church on 1st South and 7th East and began unloading gas grills and band equipment. Soon decorative balloons and banners started making their way onto random walls, and everywhere we looked, people wore bed sheets. It was a beautiful summer day, making its way into a beautiful summer night. 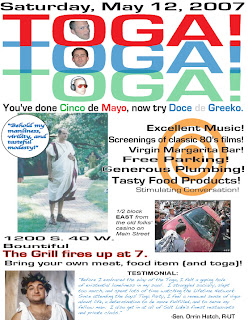 Then a microburst drifted over the valley, and a single bolt of lightning knocked out the power to the church.

Outside, business went on as usual. The Truck Pull was a huge success, the relay games were going strong, and the nerf javelin competition was living up to billing. Inside, I stared at a powerless stereo that was supposed to be playing my special Toga mix and wondered whether God had struck me down in a figurative sense.

On a quiet stage, Thunderlips’ instruments rested unplayed. Even the cage we’d built for our go-go dancing gorilla out of PVC pipe from Loews was vacant. Eventually a group gathered in the darkened gym to hear Bob Morley sing his Jimmy Buffet parody “Wastin’ Away At the 32nd Ward”, accompanied by an acoustic guitar and a half-hearted tambourine from yours truly.

Maybe I really wasn’t ready to debut as a lead singer. Maybe God was sparing me from embarrassing myself. Maybe Thunderlips wasn’t as good in reality as we thought we were in rehearsal. I’ve mulled over a number of possibilities over the years, wondering just what the eternal significance of my failure meant. Could this really be God shaking his fist in vengeance?

Then I realized something. I realized that in the years since, I’ve gotten a lot more mileage out of this story as a failure than I ever would have had it been a success. The success would probably have been forgotten quickly. The failure gave me writing material.

Last weekend was fun, but I doubt I’ll be talking about our virgin margarita bar six years from now.
Posted by The Professor at 1:48 PM