What would it take to get Salt Laker's to riot?

Tuesday night at a quarter to Midnight I was walking along 400 West in Salt Lake with my old roommate Brandon when we passed this guy in a bright Hawaiian shirt bopping by in the other direction. He had a big smile on his face as he shimmied from side to side while rapping the lyrics to Sugarhill Gang’s “Rapper’s Delight”.

One might suppose he was drunk. Or stoned. Or just a weirdo. Especially since he didn’t have any headphones on. But Brandon and I knew better. Besides, this guy was a lot more normal-looking than the guy that decided to go stand in the middle of the road and get his freak on in front of a full-size truck that was blaring its horn at him. I’m not sure that guy was drunk, either.

See, Tuesday night the Jazz finished off the Golden State Warriors and advanced to the Western Conference Finals for the first time since 1998. So people were in a celebrating mood. Horns were honking, people were yelling, spontaneous chants were popping up all over. It was the kind of unifying behavior that makes academic types nervous.

For the 100th time in the last six months, I was reminded of how tightly our community psyche is tied to the Jazz. For better or worse, this little sports franchise is our ambassador to the public stage, and it has been nice to see them representing lately.

Ever since the Spring 1988 Fathers and Sons outing at Camp Zarahemla, when I crammed into the back of a Chevy Van with fifteen guys around a little 12-inch TV set to watch the Jazz beat the Lakers in the 87-88 playoffs, a bit of my self-esteem has been roped to the franchise with the oddest name in the NBA.

In spite of my admiration for Michael Jordan, I was bleeding purple that night at the Salt Palace two years later when my dad and I watched the Jazz overcome an 8-point deficit in 40 seconds to beat the Bulls when Stockton hit a desperate lay-up over His Airness himself.

When I served my mission in South Chicago, and the Bulls played the Jazz in the 1997 Finals, I rediscovered a pride in the land of my nativity, in spite of the love of Chi-town I’d been developing for 18 months.

This year, I finally became a season ticket holder (albeit a partial one—I share with a couple of guys at work), and became a face in the crowd on a more regular basis. Over the season I grew to love the moment towards the end of the game when the crowd would sense the win, rise to our feet, and declare victory as the last minute ticked away.

Tuesday night’s game was the first one that left my ears ringing for hours afterward.

Oddly, the Jazz played a lousy game. They missed six free throws in a row and threw the ball to the Warriors so often it began to look intentional. But in spite of that, they coldly dispatched the league’s new darlings, along with their bearded (and unsuspended) leader Baron Davis, with extreme prejudice. Four games to one. At least Golden State can still watch the highlights of Baron’s Game 3 dunk.

As a bonus, I got a Jazz hand towel when I arrived at the arena, so now I’ve got a towel for my bathroom. (I still need to buy a garbage can, though).

By making the Western Conference Finals, the Jazz officially surpassed my early-season prediction for this year’s success. I still figure it will be another year or two before we’re really looking at a possible title, but the way things are going, I wouldn’t put money against it. 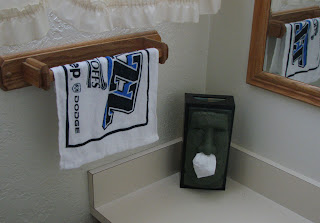 It also adds support to the idea that the yearly parade of awards should at least wait until the playoffs are over. Not only did the league MVP get ousted in the first round, but the chap that beat Jerry Sloan for coach of the year also failed to get to round two (Though I’m sure Jerry would rather be in the conference finals).

In the years after the Jazz made their two finals runs, I always figured I’d keep watching until Stockton and Malone retired, then I’d probably turn away from the league in disgust, finally unable to tolerate the selfishness and posturing that had already turned many of my friends over to the college game.

But thanks to guys like Paul Millsap and Deron Williams, I’m still here. And though I don’t know if I’m going to be stopping traffic anytime soon, I’m not planning on going anywhere.

As Brandon and I made our way to the car, I mulled over a question that had popped up from time to time. If the Jazz ever won a title, would Salt Lake City riot? The night the Bulls clinched against us back in '97, Elder Clark and I saw troops in full riot gear manning the corners of South Chicago. It seemed silly to think that button-down Salt Lake could ever mirror the same scene.

But as I looked at how wired everyone was after getting to the conference finals, I began to reconsider. I doubt we'd ever go as far as to start breaking out store windows and setting fires all over town, and the term "riot" wouldn't be the best word to describe it, but if the Jazz do win a title, I think we can expect to see some crazy things. I'd like to see it happen.