Time to get the "Eye of the Tiger"! 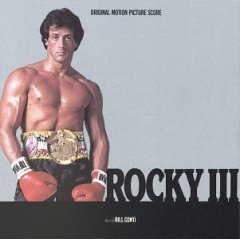 The time has come to repair our nation’s image at home and abroad. For too long we have slaved under the unjust weight of critical oppression, but at last we have a solution: we change our National Anthem to Survivor’s immortal classic, “Eye of the Tiger”.

Who better to turn to than Sylvester Stallone when we need to repair our national image? Who better to trust with the pulse of than the man who single-handedly won the support of millions of Americans with “Rocky III”, “Rocky IV”, and “Over the Top”? “Eye of the Tiger” was the greatest of all the great Rocky songs, and will be the key to restoring ’s place atop international approval polls.

So-called “purists” may call this idea heretical, but do we really want to listen to those that would have us roll around in wagons and burn witches? How can we hold our heads high on the world stage when we sing a national anthem written by a guy named Francis? Our insistence on using the Star-Spangled Banner at sporting events has given us Roseanne Barr and Carl Lewis. This cannot continue.

We should also heed the example of another American hero: David Hasselhoff. Europeans will never embrace us until we go with what we know, and what we know is that David Hasselhoff can move Germans in a way Francis Scott Key never will. He already moved the world with “Baywatch”. Now tell me: who is more likely to do a cover of “Eye of the Tiger” for the European market, Francis or the Hoff? Clinging to stodgy tradition is clearly not the way to go in this case. We must embrace the juggernaut that is our popular culture, and satisfy the needs of our people. You can’t tell me that if “Eye of the Tiger” went up against “The Star-Spangled Banner” on “American Idol” that “Tiger” wouldn’t wipe the floor with the Banner. Plus it would fit with today’s all-important retro trend.

If we don’t make this adjustment, the world will continue to hate us and view us as a sad relic of the past, just like Al Davis. Kim Jung Il will have no choice but to blow us away with that nuke of his, and by the time that happens, we will be caught with our knickers down because we will be bopping around in our powdered wigs trying to get the blacksmith to fix all our wood-burning stoves.

You still may be hesitant to leave behind such an American icon as our out-dated anthem. Well let me tell you about the time the lead singer of Survivor saved my life. One time last year I was walking down the street listening to “Eye of the Tiger” on my iPod, and while I was in the middle of my air-guitar solo, I almost stepped in front of an ice cream truck. But this guy reached out at the last second and tapped me on the shoulder before I stepped off the curb. The guy was the lead singer from Survivor! I could tell because he had on a Survivor T-Shirt from their world tour in . He was just pushing a shopping cart around picking up garbage, doing his patriotic duty to keep clean. And when he turned around, I saw that his jeans had big holes in the butt, so you could see this huge tattoo of the American flag on his cheeks. I ask you, who else but a true patriot would tattoo Old Glory on his buttocks? Complete with all fifty stars and thirteen stripes, eh?

If we want to survive, we have to go with Survivor.