I am pleased to introduce the newest addition to my impressive stable of actor/models:The Professor. He is a spectacular new prospect that is eager to bring a wealth of talent to your projects and a wealth of profits to your pockets.

You have undoubtedly already seen Josh in the critically-acclaimed “Church Ball”, which was recently released on DVD. Josh joined an all-star cast that featured Gary Coleman, Fred Willard, Ron Howard’s brother, and that guy with the moustache from the Wes Anderson movies that is related to Owen Wilson.

This riveting film deconstructs the enigma of church recreation league basketball. Josh is himself a longtime church basketball veteran, and his real-life experience is more than evident in his on-screen work. 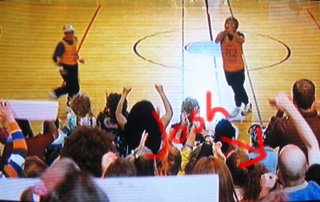 Exhibit A takes place early in the third act of the film. Here we see Josh in the lower-right corner of the frame, enthusiastically applauding the arrival of the home team. See the emotion he resonates through a triumphant upraised arm, signaling victory to his beloved squad! 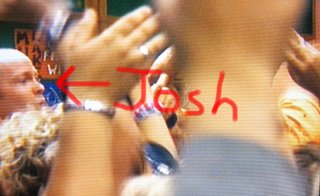 Exhibit B comes a bit later on, after the squad takes the title. This time Josh demonstrates his versatility by appearing in the left side of the frame, joyously congratulating co-star Fred Willard, who is obscured by upraised hands. (Fred’s endorsement quote was unavailable at press time).

Aside from his film work, Josh is also a veteran of the stage. In 1994 he was named Actor of the Year for . Josh is a meticulous artist and craftsman. He once wrote a 168-page screenplay about Kung Fu and brine shrimp, and his short film entry to the Show won “Best Acting”. Now is clearly the time to jump on this talent.

From the enclosed still frames you will notice that Josh is bald. But don’t let that fool you. Josh has made it quite clear to me that he has no intention of settling into mere character roles. In truth, he has received multiple compliments on the shape of his head, which could be described as “globe-like”. He boasts spectacular eyelashes and lips, and is eager to try his hand at romantic leads. He is most excited to work with Jessica Alba and the girl that plays Kate from “Lost”, but is also willing to work with . He has also suggested several of the Utah Jazz Dancers as up-and-coming talents.

I anticipate he will get very busy very fast after his recent star-making turn, so the sooner you call me the better. The time to cast Josh is now. In fact, it might be smart to have a couple of movies in mind instead of just one, cause I’m sure he’ll want to go after the more lucrative offers. A list of his favorite foods and preferred amenities is attached.

PS: My office line will be disconnected until Friday between 8am and 3pm.

Posted by The Professor at 3:18 PM