Life Lessons of the Zombie Apocalypse

This weekend I hosted my eighth annual Zombie Fest, a simple celebration I started with my roommates back in 2006. The formula is simple: gather a few like-minded zombie fans, and watch a couple of zombie movies. That’s pretty much it.

Over the years I’ve wondered what it is that makes me such a fan of zombie movies. Is it the thrill of the scares? Is it the black humor or the incisive social commentary? Maybe it’s just the fond memory of watching the original “Night of the Living Dead” in my parents’ basement all alone Halloween night back in high school.

Whatever makes the connection, it’s pretty clear that, judging from the number of annual zombie-themed movies, not to mention a top-rated cable TV show, I’m not alone in my affections. But even if you write it off as a passing trend or a sick fascination with gory makeup effects, a little digging will reveal a surprise beneath all the prosthetics: the zombies want to teach us.

Here are some of the life lessons I’ve taken from a few of my favorite zombie movies:

(Note: Readers should expect spoilers in the following analysis, though I’ve tried to be as discreet as possible for anyone still hoping for a fresh viewing).

The Movie: Ground Zero for the modern zombie film genre takes place in a farmhouse where a group of strangers gather to fight off an advancing pack of the undead. George Romero’s low-budget film almost singlehandedly took horror from the camp of the 1960s to the gore fest of the ‘70s, and in the process, “Night of the Living Dead” drew the template for zombie-fighting male archetypes.

There are two principle leads: Ben, the African-American who leads the effort to board up the farmhouse, and Harry, who Ben discovers hiding his wife and injured daughter in the cellar. Ben is all business, and understands that survival will only be possible if the refugees work together as a team. Harry is paranoid and unwilling to trust anyone but himself. Eventually this friction comes to a head, and Ben shoots Harry in one of the film’s few violent exchanges between living characters.

The Message: If you want to survive, work as a team, and be willing to trust others.

The Movie: Ten years after ushering in the modern zombie era, Romero delivered “Dawn of the Dead,” about a group of apocalypse survivors who hole up in an abandoned shopping mall and try to establish a normal day-to-day existence while fighting off competing survivalists and the undead. Surrounded by the finest of material goods (for 1978, anyway), the protagonists of “Dawn of the Dead” are often interpreted as a metaphor for first-world materialistic consumption and its oblivious attitude toward third-world suffering.

As in “Night of the Living Dead,” “Dawn” focuses on two leads: Peter is an echo of the previous film’s Ben, a practical-minded African-American who acts as the group’s realist. Stephen, the other lead, is a helicopter pilot who holds out hope for a traditional domestic existence with his girlfriend Fran. When a group of looting bikers break into the mall, Peter’s plan is to lay low and wait for the survivalists to leave once they’ve finished indulging themselves. But Stephen is unable to overcome his own pride, and the misguided sense of ownership he has developed for his new materialistic surroundings. He opts to confront the looters, and loses his life in the process.

The Film: Long before he helmed the first Spiderman franchise or sent James Franco to Oz, Sam Raimi staked his reputation with this celebrated cult film about a group of youngsters who unleash a demon in a remote cabin that turns its victims into a possessed, chaotic breed of walking dead.

“Evil Dead II” features future B-movie hero Bruce Campbell in the same role he introduced in the first film in 1981. As Ash, the leader of the ill-fated cabin group, Campbell is forced to take a chainsaw to his own arm when it becomes possessed with the demon. Ever the optimist, Ash attaches a chainsaw to the stump as an added convenience.

The Message: When life gives you lemons, make lemonade.

The Movie: For decades after “Night of the Living Dead,” traditional zombies were by definition a slow-moving and dim-witted bunch, until Danny Boyle decided to break the rules in his 2002 film about a virus outbreak that turns Britain into a quarantined island full of sprinting rage-fueled monsters. Some traditionalists refuse to accept Boyle’s masses into the zombie canon, but like the possessed victims of “The Evil Dead,” they should be considered close cousins, at least.

The primary protagonist of “28 Days Later” is Jim, a bike courier who wakes up in an abandoned hospital four weeks after the outbreak. He teams up with a handful of other desperate survivors, including Frank, who shelters everyone in a tower flat where he has been hiding out with his teenage daughter. Unlike Harry from “Night of the Living Dead,” Frank is a father figure who is willing to trust outsiders, and eventually the group sets out on a journey to locate the source of a mysterious radio signal. But in a fit of frustration along the way, he strikes out at an irritating bird and winds up with infected blood in his eye.

The Message: Be quick to action, but slow to anger.

The Movie: Almost all zombie movies have a degree of campiness, but “Shaun of the Dead” was the first all-out satire of the genre, focusing on yet another band of British survivors who fight their way to the local pub in the aftermath of the zombie apocalypse.

The titular Shaun, played by Simon Pegg, is the poster child for the stunted man-child modern society has created (and Art of Manliness has sought to cure). Sitting at plus or minus 30 years old, Shaun is going nowhere in life, working at an electronics store, playing video games with his best friend, and wondering why his long-suffering girlfriend dumps him when he tries to take her to the local pub for their anniversary. Fittingly, once the zombie apocalypse hits, Shaun opts to take his group of survivors (including the girlfriend and the best friend) to that same pub. But in Shaun’s case, the worst of circumstances brings out the best in the man. Simply by creating and sticking to a plan, Shaun is able to steer (most of) his comrades to safety, and the apocalypse makes a man out of him in a way normal life never could.

The Message: Have a plan.

The TV show: “The Walking Dead” is based on a graphic novel series of the same name, and has been eating up the competition (pun intended) in the ratings for three seasons on AMC. Like many of the films on this list, it is less interested in the origin of the apocalypse and more focused on its survivors (in this case the ones just outside of Atlanta, Georgia).

Walking Dead features a laundry list of interesting male characters, but by season three, the focus centered on a pair of rival faction leaders. One is Rick, a former police officer whose leadership experience and access to firearms placed him in charge of a group of survivors that is trying to hold down an abandoned (and sometimes zombie-infested) prison. The other is The Governor, a former schoolteacher who has managed to create a facsimile of pre-apocalypse life for a few dozen survivors inside a portion of a small town that has been walled off to the outside world. In many regards, Rick and The Governor are almost identical: both have lost close family members, both are distrustful of outsiders, and neither is much of a saint. But you don’t need the Governor’s eye patch to make it obvious that while one man is fighting the temptation to descend into madness, the other set up camp in Crazy Town long ago.

The Message: Hang on to your humanity.

The Movie: With over four decades of zombie movies in the rear-view mirror, originality has become a challenge. Yet early in 2013 we have been favored by what could be considered the first zombie romantic comedy, and certainly the first zombie romantic comedy told from the perspective of the zombie himself. This story of young love in the zombie apocalypse is heavy on wit, but also strong on message.

The first true zombie lead is R, who spends his days wandering an abandoned airport with his fellow undead and having funny interior monologues until one day he encounters a group of human survivors searching for medical supplies. The humans are led by a striking blonde with a knack for heavy artillery, and with a little help from John Waite’s “Missing You,” R is smitten, triggering one of the strangest love stories in recent years. Along the way, “Warm Bodies” suggests that the zombie condition may not be irreversible.

The Message: Redemption is possible, for even the most unlikely of candidates.

The Movie: Based on Max Brooks’s exhaustive novel of the same name, “World War Z” takes on the zombie apocalypse on an unprecedented worldwide scale. Where most zombie movies center their stories on the plight of a handful of scrappy survivors, “WWZ” gives viewers the chance to watch the apocalypse tear down civilization as we know it, in country after ill-fated country.

“WWZ” is told from the perspective of Gerry, an ex-United Nations operative played by Brad Pitt, who spends the film on a globe-trotting detective hunt, narrowly avoiding the zombie rampage all around him as he desperately searches for a solution to the epidemic. As he does, he learns that sometimes the answers can be found in the chaotic midst of an adversary’s perceived strengths.

The Message: Pay attention to the details. 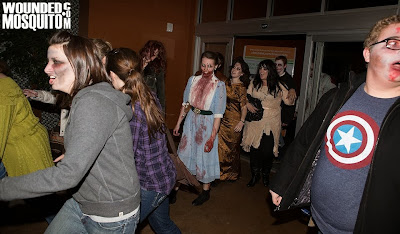 Posted by The Professor at 4:47 PM