Time Flies When You're Traveling at Light Speed

"Return of the Jedi" was not the first Star Wars film I ever saw. But it is the first Star Wars film I remember seeing. I have a vague memory of my mother coming into my bedroom as a child to summon me for a screening of "The Empire Strikes Back," and according to my parents, I was terrified of the Jawas in "A New Hope" as an infant. But I have very clear memories of "Return of the Jedi." Memories that are now thirty years old. 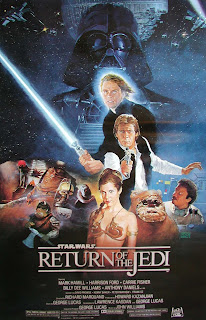 The memory that keeps coming back over and over to my mind is standing in a ticket line that wound through the parking lot outside the Century Theater with my dad and Steve Jones, my best friend. In those pre-internet days there was little more than vague rumor to prepare me for what I was about to see, but thanks to a quick glance at a novelization my mother had picked up at the grocery store--complete with a half dozen glossy photos from the movie tucked halfway through its pages--I knew two things about the third chapter of the trilogy:
What I didn't know was whether George Lucas and co. were going to stick with this silly idea of having Darth Vader be Luke Skywalker's father. As a six-year-old who was wise beyond his years, I was still unconvinced of Empire's famous plot twist.

"Why do you believe what he said?" I would ask anyone who would listen. "It's DARTH VADER. HE'S A LIAR."

Of course, 45 minutes into the film, Yoda confirmed the relationship, then Ben went him one further and told Luke that Leia was his sister. I was totally fine with this, because as a Han Solo guy*, I wanted him to get the girl in the iron bikini.

The thing I was too young to notice was the Ewok controversy. They were far from my favorite Star Wars characters, but I didn't have any problem with them helping to overthrow the Empire. I think I would have been more disappointed if I'd known Lucas was originally planning for the planet to be inhabited by Wookiees. Live and learn, eh George?

This was also before I grew in my appreciation for Boba Fett, so I wasn't crestfallen when I saw the most notorious bounty hunter in the universe Abbott and Costello his way into the gaping maw of a sunbathing Sarlaac. Strangely, the pattern of not questioning a film in the moment is something that has followed me through to adulthood, though my current employment is forcing a more critical hand.

Even though I attended the opening day screening with my dad, it was my mother who took me the majority of the 19 times I watched "Jedi" over the course of that summer**. I'm sure half of the time it was me nagging my parents to go, but there were just as many times that the motivation came from my parents' own interest. Another lasting image from that summer is my dad swinging our brand-new 1983 Honda Accord up to the sidewalk in front of the old Center Theater on the corner of State Street and Broadway in downtown Salt Lake. Before I knew what was happening, my mom was pulling me out of the car and hustling me through the red velvet ensconced lobby on our way to a spontaneous afternoon screening***. That's the kind of thing I'm talking about when I refer to my mother's influence on my appreciation for popular culture.

But the best family memory of Jedi has to be the time we dragged my one-year-old sister to a screening and wound up on the front row. She sat on my dad's lap and stared bug-eyed at the screen for two full hours.

Man, I really miss the Center Theater. It's an office building and a multiplex right now.

Years later, even though Empire has become my favorite of the three movies, Jedi maintains the closest ties to my childhood memories. One afternoon as a teenager I was riding shotgun with my Priest's Quorum Advisor on the way to a temple activity when I related the story of my dad and Steve and I at the Century.

"Wow, that's impressive," my advisor said. "When were you baptized?"

I thought about it for a moment.

"Sometime when I was eight."

Happy Anniversary, "Return of the Jedi." Jacking up my spiritual priorities for more than three decades now.

*See my blog banner for evidence.

***Inside the theater they'd hung a huge banner advertising a film called "The Big Chill." Though I didn't relate to the story of a half dozen ex-hippies reflecting on the aftermath of the '60s in the wake of a friend's suicide, the film's soundtrack pretty much laid the childhood foundation for my musical appreciation, including this song.
Posted by The Professor at 11:15 AM