His Name is Mud

"Mud" offers a simple premise: two boys in rural Arkansas stumble onto a fugitive murder suspect hiding out in a swamp. But "Mud" is anything but a simple movie, and it has anything but a simple message. It is a brooding drama that is dark and funny and sweet at the same time, which is maybe just another way of saying it feels like real life.

It reminded me of Rob Reiner's 1986 coming-of-age tale "Stand By Me," partially because one of the boys (Neckbone, played by Jacob Lofland) is a buzz-headed hick who channels River Phoenix. The other (Ellis, played by Ty Sheridan) is the hopeless romantic I remember being at 14 and the tough-nosed punk I wish I had been at 14. Often the best characters remind you of who you are and who you wish you were.

The first plot point was a surprise. Maybe I've seen too many episodes of "24" or too many spy movies that use the old hostage cliche, but I assumed that the fugitive (named Mud and played by Matthew McConaughey) would feel threatened by the boys' discovery of his hideout and immediately threaten them with harm. Ellis and Neckbone seem to anticipate this during their first meeting. Instead, Mud recruits them to contact his girlfriend (Reese Witherspoon) and help with his escape plan, and the film becomes a study of the nature of trust, love, and role models.

The film is built of echoes:
On the one hand, Ellis looks to Mud and gets a tortured mix of hopeless romance undermined by self-sabotaging dishonesty. On the other, Ellis sees Gaylen, Neckbone's uncle (played by Michael Shannon), who spends most of his day in an ill-fitting wet suit, uses the Beach Boys' "Help Me, Rhonda" as both his "doin' it" song and his philosophy for life, and offers Ellis the most critical message of the film via a river garbage metaphor. His comic relief is the highlight of several strong supporting performances, and it saves "Mud" from sinking into the bayou under the weight of its own melancholy.

"Mud" is an interesting foil for "Beasts of the Southern Wild," another film set in the swamp that looks at its world with the wide-eyed wonder of child, and struggles to maintain its innocence when harsh reality gives its protagonist a swift kick in the Private Idahoes. It's the kind of movie that stifles your impulse to crack jokes about Matthew McConaughey going shirtless or Reese Witherspoon's (in?)conveniently timed arrest record. You want to point out that it feels a little long, but then you have to acknowledge that its deliberate pacing and mood is critical to its effect, and that you are probably just too used to movies that offer quick editing and a fast pace because they have nothing important to say. "Mud" isn't the kind of movie you watch with a group of friends on a Saturday night. It's the kind of movie you watch on your own in the middle of the week when you want a film to give you something to think about. It's beautiful and profound and well-worth a watch on the big screen, but you can see it on DVD and be just fine. In fact, the best endorsement I can offer is that two-thirds of the way through the movie I started to consider whether I would buy a copy of the film for my permanent collection.

"Mud" is rated PG-13 for consistent profanity, some vulgar dialogue, scattered violence, and the sight of Michael Shannon in a wet suit. 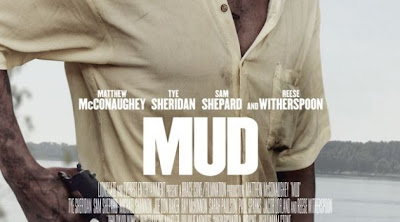 Posted by The Professor at 9:30 AM