Last weekend I helped my dad and brother-in-law pull 100 square feet of orange shag carpet out of a tiny room in my parents' basement as an old poster of Pierce Brosnan looked on. It felt like ending a chapter in my life. Several chapters, actually.

Growing up, there were five rooms in my parents' house that featured genuine 1970's shag carpeting. Downstairs in the TV room we had a bright red shag that strangely matched the dark brown wood paneling on the walls. I sat on the red shag next to my new friend Steve the day my family moved in when I was four. We watched a re-run of "Gilligan's Island." Now Steve is married with five daughters and a little boy.

Upstairs in the living room we had a bizarre multi-colored shag carpet, a combination of brown and orange and yellow that was remarkably adept at hiding the scars and stains of its high mileage. I think my parents actually kind of miss that one.

Two bedrooms were also equipped with shag: a yellowish shag in my sister's room, and a lavender shag in my parents'. The yellow shag was the first to go--many years ago my parents pulled it up to reveal a nice hardwood floor. The master bedroom was re-carpeted at the same time the living room shag was replaced.

The last holdout was that tiny room in the basement. For years it was referred to as the "toy room," because that was where my sister and I kept all our toys. That was where I lingered late into the evening one Friday night when I was eight, reading and drawing and waiting for the inevitable moment when my parents would realize I was up way past my bedtime and cast me upstairs to my doom. That moment never came, and I discovered that weekends were my opportunity to live out my true nature as a night owl.

Not long after that big event my parents moved their stereo into the toy room, and it became known as the "music room." With that large wooden cabinet in place against the east wall, flanked by those ancient speakers, I was ready to have one of the transcendent moments of my youth, when I squatted down on that shag carpet as a wide-eyed fourth grader and created my first mix tape out of my mom's Beatles albums.

I must have had a hundred sleepovers on that orange shag, and built a thousand forts on its weave. Most of the posters--like Pierce in his open-shirted Remington Steele glory--are still on the walls, and the south wall is still covered in that strange reflective wallpaper textured with those thin yellow and white stripes. But the orange shag is gone, shipped off to that magical home furnishings heaven where all non-ironic icons of the 1970's go to sing praises to Sherwood Schwartz and the Six-Million Dollar Man.

For the last year I've been on the housing market, searching through all sorts of 1950's-era ramblers and quaint cottages for some wood paneling I can call my own. Every time I step inside a new listing, I marvel at the oddities the previous owner has left behind--wallpaper with fairies and race cars, a collection of Mormon pop cassettes still in their shrink wrap, a bound collection of old 45's with a detailed log of artists and titles pasted into its front cover. By the time anyone walks through my parents' house, there probably won't be much left from my era, now that the flooring has all changed over and the walls have been repainted. But maybe we can make sure Pierce is still there to say hi for us. 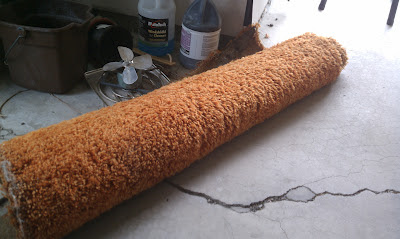