If someone asked you for their autograph, what would you do? Would you laugh it off, assuming you had been mistaken for someone else? Would you just write your name, or include some kind of thoughtful message? If you included a message, what would it be?

This is the predicament I found myself in last June after playing a brief show for the students of the Legacy Prep charter school in North Salt Lake. On the strength of two previous performances, my band Thunderlips had been recruited to headline the kids' year-end assembly. We played two 20-minute sets, one for the K-3 kids, and another for the 4th through 6th graders. 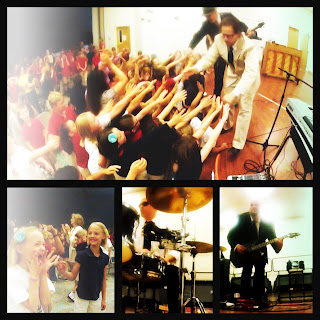 Immediately after our first set I was approached by a young girl who had ripped her name tag from her desk.

"Can I get your autograph?" she asked, holding out a black marker.

This request would prove to be the first of many. Following our second set, kids from all over the school approached us with their yearbooks, pens and markers in hand, looking for some tangible evidence of what they had just experienced. As I wrote my name on yearbook after yearbook, feeling their awed stares as I scribbled, it was clear they had little understanding of who we really were.

"So do you guys perform, like, all over the world?" asked one kid.

Whenever I meet a young child, I usually think about Ray Bradbury's experience as a twelve-year-old growing up in northern Illinois. After a mid-summer trip to the circus, the future author of "The Martian Chronicles" and "Dandelion Wine" approached a magician called Mr. Electrico in search of a mentor, and was rewarded with the inspired command to "live forever." Decades of fantasy and science fiction novels followed, all with the irrepressible fervor of youth pressed firmly between their pages.

Perhaps with that idea working deep on our subconscious, the band had decided to end our performance with a ramped-up version of one of the most iconic school dance songs from our youth: Alphaville's "Forever Young." In our previous performances, we'd played Neil Diamond's "America," and not wanting to repeat ourselves, we still wanted to offer up a tune that had a special meaning to us.

For the first part of the set, we rocked our way through a few favorites, like The Hives' "Hate to Say I Told You So" and the Stones' "Jumping Jack Flash." Then Cheetahman took his place at the keyboard and coaxed out the chords that used to trigger slow dance anxiety in our pre-teen hearts all those years ago.

Then, just as the first chorus hit its final note, I hit my crash cymbal and yanked the band into an accelerated beat. Our quickened pace got everyone to stop swaying back and forth and got them jumping up and down instead. Moments later, with the verses and a few choruses behind us, Thunderlips entered extended jam mode, with about half the student body leaping and screaming at our feet. But out a little farther into the gymnasium, the other half of the student body reacted differently, grabbing each other's shoulders and forming a daisy chain that danced and wound around the gym in a huge circle around the video camera I'd set up on a tripod at mid court. It was corny, but as I sat there behind my drum kit jamming away through a song so intrinsically connected to my youth, watching as the kids celebrated their last day of school in the prime of theirs, I felt like I was passing them a torch as the whole cosmos was coming together into harmony.

Of course, maybe that was just Cheetahman's voice modulator.

Later on, when all those kids came up to me looking for my autograph, it didn't seem right to just sign my name on all of their yearbooks. I had to write something else. Something meaningful. Something Ray Bradbury would have told them.

This is what I added:

The cosmos came into harmony again four days later when the first man who truly inspired me to write passed away at the age of 91. Eight decades after their encounter, through hundreds of stories and thousands of touched hearts, Ray Bradbury had followed Mr. Electrico's instructions to the very end. And maybe thanks to a little performance in a North Salt Lake charter school, I helped to keep his charge alive.

The Thunderlips - Forever Young (Alphaville cover) from ToolBox on Vimeo.
Posted by The Professor at 9:14 AM