I don't know what it is about celebrity death, or celebrity grave sites, that is so fascinating. Chuck Klosterman wrote a book about a mega-road trip he took to visit the death sites of various rock and roll heroes, and the title of Rolling Stone author Neil Strauss's book "Everybody Loves You When You're Dead" speaks for itself. Maybe it's because we typically see celebrities as otherworldly creatures, images on a TV screen or voices on the radio, and standing next to their gravestones reminds us that they were actual human beings. Maybe we're just weird.

When I was an LDS missionary in Chicago, I was excited to learn that Al Capone's grave was in a cemetery across the street from the chapel where we held our mission leadership meetings. There was probably no more iconic Chicago "celebrity" than Capone, so after every meeting, a few of us would head over to see the grave and take pictures. This led to the curious image of a half-dozen guys in dark suits standing somberly over the grave of a deceased mafioso.

Last summer, on my first visit to Seattle, I made a point to visit the Jimi Hendrix memorial. Whereas Capone's marker was little more than a flat nondescript chunk of cement, the Hendrix Memorial was the centerpiece of the entire cemetery. I guess you can take a lot of messages from that. 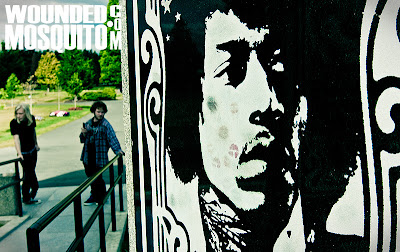 I had already arranged a return visit to Seattle before I compiled my Birthday List, so I thought I should try to come up with an item or two that I could take care of while I was in town. Having already visited the Hendrix memorial, it seemed logical that I should visit the grave site of another Seattle music icon, Kurt Cobain. Trouble is, Cobain doesn't have one. He was cremated. You can go see the house where he committed suicide back in the 90's, but that seemed a little too macabre to justify. Besides, I found a better option.

Bruce Lee has been a fascinating character to me ever since I saw his bio pic "Dragon" when I was a teenager. While I've never been a huge fan of martial arts films, I was very interested in how Lee was able to discipline himself into such a finely-tuned butt-whooping machine. Plus, unlike the images created by a lot of Hollywood behind-the-scenes tell-all's, he seemed like a genuinely good guy. From time to time I'll wonder what would happen if I just set aside all my favorite junk foods for six months and did some hard-core training. I certainly wouldn't be Lee, but his example does suggest a little of what the human body is truly capable of. It's a topic that becomes more and more relevant after you cross the line into your 30's.

Anyway, Lee is buried in north Seattle (his wife's hometown), and on a Sunday afternoon in early July I zipped up there with The Cheetahman (another example of what the human body is capable of, if you're referring to Guess boots and cheetah-print speedos) to check it out. He's actually buried next to his son, Brandon, who died in a film set accident two months before "Dragon" was released (Bruce died at 32, his son at 28).

The grave site was a little crowded that day, so I didn't linger for a lot of quiet contemplation. In a way, I almost felt under-qualified to be there, since I wasn't as familiar with his film resume the way I was familiar with, say, Jimi Hendrix's recording career. On the few occasions I have dropped by to see the grave of someone famous, I've noticed there's always a moment where you quickly transition from a kind of laid-back "hey, I'm going to go see so-and-so's grave!" to a somber realization that you are visiting the final resting place of a real human being. Two-dimensional celebrity becomes three-dimensional reality, and at that point you lose interest in the nature of the person's death and think more about what they were in life. So I just took a couple of pictures and tried to maintain some semblance of an air of respect. Maybe it's true that everybody loves you when you're dead, but unlike Capone, Bruce Lee seems like someone who deserved to be loved when he was still around. 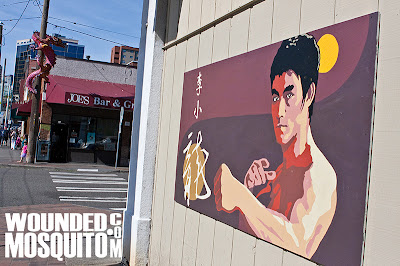