One of the great things about heading out to Chicago last month was that I had multiple opportunities to enjoy the Windy City's signature deep dish pizza. The pizza out there is so good it ruins you for everything else.

There are a lot of places outside of the Midwest that try to sell you on the idea that they serve "Chicago-style" pizza, but in most cases, they aren't even close. The problem is most people assume the only difference between Chicago pizza and regular pizza is that the former is really thick. But there's more to it than that. Chicago deep-dish is deep because it's designed more like a pie than a flat slab of dough with toppings. The crust is also flakier, more of a pastry than a chewy dough, and it really isn't all that thick. In addition, you put the tomato sauce on the top of the pizza instead of in-between the crust and the cheese. In short, this is Chicago deep dish pizza, courtesy of a picture I took the night I dropped by the Giordano's at 7th North and Rush Street: 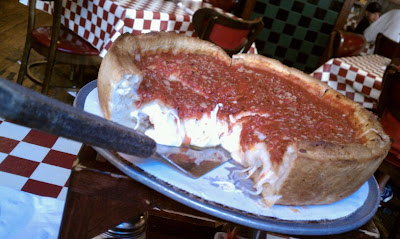 Now, while eating genuine Chicago deep-dish pizza was certainly a trip priority, it wasn't an official Birthday List item. But eating at the Sweet Home Chicago Pizzeria was. And why?

Because the Sweet Home Chicago Pizzeria is located in Draper, Utah.

I first heard about the Pizzeria several months ago, and in spite of my initial skepticism, retained a curiosity for the place based on its website photos, which seemed to depict real Chicago-style pizza. As I was putting my list together, it was obvious that the time for a visit had come. The prospect of finding genuine Chicago deep dish pizza so close to home was too tempting a possibility to ignore.

So late last week I teamed up with Brad, one of my old Chi-town mission buddies, to go put this place to the test. We were both kind of nervous to go, especially when on the way we decided to call ahead and see if they could start our order ahead of time. Authentic deep dish pizza takes about forty-five minutes to bake properly, and we didn't want to abuse the time restrictions of our lunch hour, but the girl on the phone told us that they didn't take call-in orders. She also told us that wouldn't be a problem, though, because since things weren't super busy they could probably get us our pizza in about thirty minutes.

On the plus side, the price of a small pizza was only $8.99, so we figured at least we wouldn't be out too much money if the pizza stunk. So Brad and I kept on driving south on I-15 and eventually pulled into a nice new-looking establishment at the east end of a commercial development in Draper.

A half-hour later, they gave us this: 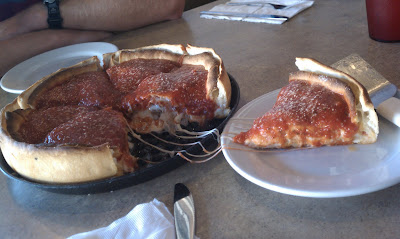 They got the crust right, and they got the sauce right. Some of the ingredients didn't leave me singing songs of culinary joy, but overall, the Sweet Home Chicago Pizzeria earned its name. Granted, looking out the windows and seeing the Wasatch Mountains instead of the classic architecture of Chicago's Loop was a little strange. The Pizzeria will never quite take the place of sitting in the basement of Pizza Due at a candle-lit table at 1AM, but it will fill the void better than any of the trendy joints in Salt Lake that specialize in cracker-thin pizza-type-objects sprinkled with pesto.

Not that there's anything wrong with that.

To each his own, but as for me and my family, we will choose Chicago-style...every time.
Posted by The Professor at 11:57 AM