Three years ago my sister and I drove a thousand miles to Comic-Con to meet Ray Bradbury.  His work was that important to us...plus, at 87 years old, we worried that if we missed our chance he might not be around to give us another opportunity.

Three years later, Ray is still alive and well, and back in the news.  Just shy of his 90th birthday, Bradbury is none too pleased with modern technology.  Specifically, he hates the Internet, Kindle, Big Government, and thinks we should go back to the Moon (and on to Mars).  People have been giving him grief for his apparent techno-phobia, especially because his phrasing of terms (IE, referring to "Internets" instead of "Internet") makes him come off like a senile old crank.  But I think his critics are missing the point of his message. 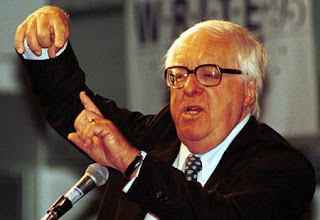 Ray Bradbury may not have a perfect technological understanding of the things he is criticizing, but 90 years old or not, I think he still gets it.  In spite of the futuristic, sci-fi element of much of his work (he defines himself as a fantasy writer, for the record), Bradbury's stories have always found their greatest strength in their humanity.  And for all the obvious advantages that modern technology affords us, over-reliance on it can take a heavy toll on that humanity.  Bradbury understands this, and I think this is why he says the things he says.

Digital technology can open wonderful doors of imagination, whether it comes in the form of a camera or a blog or a software program, but it also lets us be lazy if we want to.  You don't have to be a great photographer to take good-looking photographs, and you don't have to be a great web designer to drop some text into a template and hit "publish."

Cell phones and text messaging can be great for staying in contact with friends, but all too often I see groups of friends ignoring each other while they text the friends that aren't there.  Facebook and other social media allow us to reconnect with friends we've lost touch with over the years, but trolling someone's profile page and making occasional comments on their vacation photos doesn't create a depth of relationship.  It just suggests its presence.

I thought it was interesting that this summer's biggest movie is built around a question about our perception of reality.  "Inception" has plenty of cool special effects and an open-ended plot that keeps you guessing, but the film resonates with me because it points the finger at one of the central issues of our time: are we using technology to make genuine connections with the people around us, or are we letting it alienate us even further by using it to create our own personal cocoons of perceived reality?

Ray Bradbury made his career writing about Martians and dinosaurs, but he can also demonstrate the simple profundity of sitting on a deck with a cold drink while the sounds of nature connect you to the meaning of life.  He champions the genuine article over the synthetic, and in the sci-fi/fantasy genre, he's not alone. When he rants that we have "too many Internets," I think that's what he's afraid we're losing.
Posted by The Professor at 9:33 AM