Even after staying up past 2AM last night, I was still having trouble going to sleep, so I popped on my iPod and started listening to a 310-track playlist called "Soul Marathon." About ten minutes in, halfway through the Jackson 5's "(Stop) The Love You Save," I had a stunning realization: 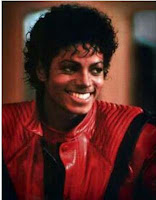 I mean, I already knew he was dead. I'd already declared him the Elvis of my generation, and lamented that the Jackson we all knew and loved had really been gone for twenty-plus years now. I knew it...but I didn't feel it. Then last night, all the dust from the media hype and the sordid allegations and the post-1985 uber-weirdness finally settled, and it dawned on me that one of the biggest icons of my youth was really gone.

It strikes me as strange that as mainstream news continues to merge with entertainment, the effect isn't that entertainment becomes more newsworthy. Instead, mainstream news feels less real. The reality only sets in once the hype has passed.
Posted by The Professor at 8:41 AM