Mormon Standard Time was one thing, but this was ridiculous. It was about five minutes before sacrament meeting was supposed to start, and as Jared and I sat in his silver Civic outside the chapel, there wasn’t a single other car in sight.

“They must have changed the schedule because of the Temple Dedication,” he said.

We’d swung out to visit a ward at the south end of the Salt Lake Valley that was rumored to hold a liberal age policy for its members. But that was a wash now, because apparently no one had opted to show up. So we considered our options. We could go to the “Mature Singles” ward that met in Salt Lake. We could go to the University Institute and try to find a ward where no one would recognize us, and preferably wouldn’t cover the University dorms. Or we could drive back to Bountiful and go to the family ward I’d been attending since January.

“You realize, Jared,” I said, “we are at the absolute nadir of our single existence.”

There we were, thirty miles from home, two overage single religious nomads in an empty church parking lot. In the aftermath of the Great Geriatric Cleansing of 2008, life had not been kind. I’d been attending a family ward for almost three months, a friendly and outgoing ward which would have been ideal as a newlywed, but as a single guy in his early thirties felt more like the last stop for services on the way to social oblivion. Social opportunities that had begun to feel redundant in 2008 remained so in 2009, only now they popped up half as often, and many felt like surreal reunions of social groups from years past that had been decimated by job transfers, weddings, and death. My jokes about starting a biker gang for U32 exiles were always half-serious, and now they were 75% serious. As those early idealistic days after the mission began to feel farther and farther away, the romantic notion of taking to the open highway on a chromed-out piece of Americana had become more and more seductive. After all, what would we be leaving behind?

Eventually we decided to make for the Institute, and as we passed another lonely car entering the vacant parking lot, Jared was tempted to make the classic throat-slashing gesture the young child in “Schindler’s List” delivered as he stood outside the train leaving for Auschwitz. We were able to make it to one of the wards on campus, but as we settled in to hear speakers wax eloquent on their memories of high school and the assortment of farewells and homecomings they’d been attending, we realized that we’d landed in a dorm ward. 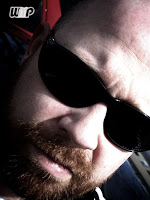 Our cause was not helped by my recent decision to augment my shaved head with a socially defiant red beard. Jared suggested that if anyone bothered us, we might explain that he was there to see a younger sibling speak, or that I was there to serve someone with a court summons.

But no one did, and so after an abbreviated meeting, we fled for the parking lot and made north for Davis County, only pausing for a young woman who didn’t seem to understand the complex protocols of the roundabout. It wasn’t the greatest Sunday, but it was far from the worst, and besides, we had a new week, a new temple, and a new spring ahead of us. Perhaps social deliverance wasn’t far behind.

Even if it came on two wheels and a V-Twin engine.
Posted by The Professor at 1:12 PM