Virgin of the Slopes

You don't have to look far these days to see that the times they are a-changin'. After all, the Red Sox have won the Series twice, and the Cardinals just made the Super Bowl. My buddy Brandon got engaged at the tender age of 37, and we all know what Obama just did. I've been feeling a little left out of the fun, so last weekend, after three decades of procrastination, I finally decided to go skiing for the first time. 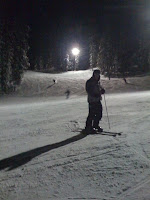 When you put something off for several years, actually doing it becomes a much bigger deal than it should be. For example, I had never been to a funeral until I attended my paternal grandmother's early last year. I'd had other opportunities, but the longer I avoided them the harder it became to motivate myself to go. Skiing was the same way. Many of my friends have been avid skiers their entire lives, but the longer I put it off, the bigger an event it became, and the less inclined I was to go unless the circumstances matched the magnitude of the occasion.

I had a variety of excuses:

Money: Skiing is not cheap. When you factor equipment and travel costs in with the price of a typical lift ticket (even night skiing is thirty bucks), you've made a modest investment. That investment becomes harder to make when you consider...

Lack of Skill: ...that you'll be spending most of your day on your behind in pain, or staggering around the mountain looking like an idiot. Which can be a serious blow to anyone who...

Overinflated Ego: ...doesn't like doing things he's not good at, or can't at least perform competently after a minimum of practice.

For these reasons, I always figured the only way I'd ever wind up on the slopes is if a girl was involved. After all, when the rubber hits the road, there is nothing better to fire up the single man's engine than to put a cute girl in front of his face. This is the only explanation for why I've ever let anyone talk me into country dancing.

But when I finally decided to go hit the slopes last weekend, there weren't really any girls involved. It was just a spur-of-the-moment thing. Brighton had a two-for-one deal on night skiing, and the second counselor in my old bishopric got us all free rentals, so I figured I could afford to blow $16 on a crash course at the Brighton Ski School of Hard Knocks.

That's how I wound up sitting next to my friends Tyler and Spencer on a Brighton ski lift Friday night, coasting silently up the mountainside and wondering if I would ever make it down alive as I gazed down at the parade of snowboarders and experienced skiers below me. The rides up the lift were actually one of my favorite parts of the whole experience; it wasn't a super cold night, so floating up through the trees in the darkness actually had a kind of meditative ponderous quality that would have been almost existential if not for the heavy boots that kept threatening to pull me off the lift and down to certain death.

Actually skiing was a very different matter, though the threat of death was also a major factor. By the end of my first run I realized that my skills as a skier are almost identical to my skills as an ice skater: I have no problem staying up, making turns, and going really fast, but I have no ability to stop. On an ice rink, this is no problem; I just go around in circles and weave through people until I get tired and coast into a wall. But on a ski run, thanks to gravity, I just go faster and faster until I lose control and plow headfirst into a tree, a snowbank, or some unfortunate sap who has decided to park his butt in the middle of the run, completely unaware that a 180-pound torpedo is bearing down on him at somewhere just under the speed of light.

One of the first things Tyler and Spencer taught me was how to snow plow; namely, to cross your skis in front of you and push outward to slow yourself down. (Note: by "crossing your skis" I mean to point the tips towards each other; actually crossing your skis leads to a headfirst crash that runs the risk of concussion, broken bones, and a major rip in the space-time continuum). Snowplowing works fine when you're gradually making your way down a gentle bank, but it doesn't help you at 70mph. So whenever possible, I would try to swing back up the run in a wide arc and let the same gravity that worked against me work for me, but when you're stuck on a narrow run--say, at the top of Brighton's highest lift where I had absolutely no business skiing on my first night out--you don't have that much room to maneuver. That's why ten feet from hitting a snowboarder who was taking a cat nap in my path, I suddenly turned and did a head-over-heels back flip into a six foot wall of powder. 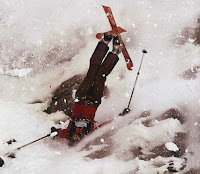 Not to say that the evening was completely miserable; far from it. Whenever I did let myself pick up a little speed, I would always enter a brief exhilarating window where I would be cruising down the run at high speed, deftly shifting back and forth as I wove down the mountainside and the trees whipped by me in a blur. It kind of reminded me of mountain biking on a gradual downhill trail, when the forces of nature take over and you feel like your bike has its own engine, sailing you along on a high-speed groove through the canyon. It's like dropping a gear in an early 90's Mazda RX-7 and feeling the engine burst to life as you fly past everyone else on the freeway. It's like zipping along on my old Trek 820 across 79th Street in Chicago after a long day of proselytizing, and the humidity finally doesn't feel so bad as you whip through the Midwestern wind. It's just that on the slopes, that brief exhilarating window always gets slammed shut as I over-correct and pitch forward, slamming the Darth Vader goggles my buddy Chidsey loaned me on the ice while my skis detach and skid across the run towards some five-year-old doing back flips on his snowboard in the half pipe down the way. 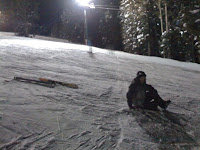 So one solution might be to find a resort that has constructed a super-wide, curvy run that has a massive protective net at the bottom to provide safe and sanitary completion for skiers who lack proper stopping capacity. Another might be to use my inevitable fame and fortune to construct one of my own. I could also take the philosophical route and connect my experience to a deeper parallel metaphor whereby humanity as a whole is speeding down the steep runs of mortality, and if we neglect to make the necessary course corrections and employ proper safety techniques, we will fall victim to the systemic socio-cultural subversion of traditional Judeo-Christian ethics by the permissive forces of evil.

Or I could just learn how to stop.
Posted by The Professor at 11:03 AM