Revenge of the GRE

I used to think I was a pretty smart guy. Then I took the GRE.

Ever since that heinous experience eight years ago, I've always gone out of my way to counsel any friend of mine who is getting ready to take the test:

"It's designed to take top-tier students and spread them out on a measurable spectrum," I'd say. 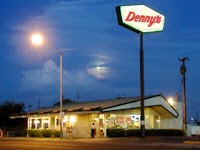 "Don't worry, it's supposed to be a ruthless, masochistic assault on your sense of self-worth as an intelligent human being that will kick you to the academic curb thinking your only sensible career option is to be first assistant to the guy scraping congealed grease off the floor at Denny's," I'd say.

I never got an exact count, but I felt like I got about 20% of the questions right on that stupid test. On the analogy questions I usually had never even heard of three of the four word options. In high school I passed the AP Calculus test with a 4, but I guess your brain defaults to 8th-grade algebra level if you don't keep using it, because the quantitative section was a joke. For some reason, the analytical section has been wiped clean from my mind. Yet after all that, somehow I emerged with a decent percentile score, at least one that was good enough to get me into Utah State. I guess that means most people do lousy on the thing. They always tell you that programs aren't as concerned with your GRE score as they are with the other elements of your application. Thank goodness that seemed to be true at USU.

Still, once I understood the design and purpose of the test, I was reassured that I might still be an intelligent person. Maybe not as infallible as I thought, but still respectable. One way or the other, I was just glad to have the stupid thing done.

Two weeks ago I took the GRE again.

See, there's one little hitch with the GRE test. The scores are only valid for five years. So no matter how good or bad you do the first time around, if you decide to go back to school more than five years later, you have to re-take the test. You know, just in case aliens stole your brain in the interim and left it floating in a jar somewhere near Saturn.

In light of our recent economic situation--er, MY recent economic situation--I've decided to look into the possibility of going back to school. And to do that, I have to get a new GRE score. That's why two weeks ago I rolled into the University of Utah testing center at 7:30am to take a customized $140 kick in the Jimmy. This time around I decided to study--never been a big fan of studying for standardized tests--because even if my brain wasn't stolen completely, I'm pretty sure that those aliens made off with the majority of my education from grades 9-12.

So now, after taking the GRE twice, I can say that the experience hasn't changed much, and sometimes it's hard to take your own advice. But it's easy to take someone else's advice, so here are a few veteran observations: 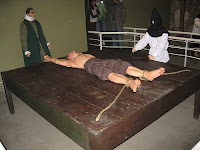 As brutal as the test, the hardest part of the experience comes before you even enter the testing center. That's when you have to stand outside with a clipboard and fill out the confidentiality statement. The confidentiality statement says that you won't tell anyone about the specific content of the test, but it's not enough to just have you sign and date the thing. That would be reasonable, and the GRE is about torture, not reason. You actually have to copy this big paragraph word-for-word that basically says "I won't tell anyone what's on the test" in about 300 words, THEN sign it.

But even that's not the bad part. The bad part is that you can't print the agreement. You have to write it in cursive. Now I don't know about you, but the last time I used cursive on a consistent basis was in the fourth grade, about a year after I first learned how to do it. Writing in cursive is not like riding a bike. It doesn't just come back, at least not for me. By the time I finished that paragraph--it seriously took me about five minutes--I was praying that the college admissions people didn't factor it into my application.

"Well, his academic record is impressive, aside from the GRE score. I like his portfolio, and his professors seem to think he's a funny guy. Still, if I try to put this school's good name behind a man who writes like a mentally-challenged fourth grader with the shakes, I'll never make Dean, and the boys at the sweat lodge will start hiding my undies again. Betty, better fire up the boilerplate rejection letter..."

The test is on a COM-PU-TER

Now, thanks to that little agreement, I can't say a whole lot about the test content. But I can say that after you sit down, you have to go through a little tutorial before you start. What kind of tutorial, you ask? Well, the first page of said editorial has a little drawing of a computer mouse on it, and above the drawing is the following statement:

Not even kidding. I'd like to think it's just there to serve as a confidence-booster, but something tells me it isn't.

Turns out I'm very glad I decided to study this time. Going in prepared is always a good idea. Before I went to see "Return of the Jedi" the first time, I borrowed my mom's paperback novelization of the movie and learned that the good guys were going to win and that Princess Leia was going to be spending time in an iron bikini, and both points helped enrich the theatrical experience immensely. Studying for the GRE had the same effect. For one thing, I found out that a lot of the questions aren't even really concerned about the specific answer as much as whether you can compare that answer to another answer and ascertain their relationship. After studying this, I still had no capacity to get the questions right, but at least I wasn't surprised on test day when I bombed them.

There is a writing section

Another thing I knew going in was that they had changed the format of the test, and they'd done so to my benefit. Instead of three sections of multiple choice questions--quantitative, verbal, and analytical--sometime after I took my first test they switched the format to two multiple choice sections--quantitative and verbal--and one written section. Not only that, but the written tasks (writing and debunking argumentative statements) are basically identical to what I did as an English composition teacher for over five years.

Again, I can't go into detail on the specific topics I wrote on--even though the complete pool is posted on the GRE site itself--but I can say that I felt pretty good about my performance. I just hope the paper graders feel the same way.

If they can torture you for three sections, why not go for four?

Unfortunately they're still throwing in that Bonus Round where you have to take an extra section of either the quantitative or the verbal questions. Plus you don't know which ones count, so there's no way to just zip through it by picking letter answer combinations that spell dirty words. They claim it's all part of the process of evaluating your score properly and developing the test to better serve both student and school, but I just think they're doing it to piss you off. At least this time I knew it was coming.

I also knew that at the end of the test I was going to have to tell them where to send my scores. You can pick four schools to get your scores for free, but after that you have to pay to transmit your humiliation. I didn't have four schools to send my humiliation, and that's why the Moody Bible Institute is going to get the results of my test.

Of course, if you think you did really, really bad, you can chuck the whole thing and not tell anybody. The computer gives you the option of canceling your score at the end of the test, though the fact that you canceled it still goes on your permanent record. They do it so you don't have to be penalized by extenuating circumstances, like heavy traffic, illness, or spontaneous human combustion. Even if I'd done poorly, I don't think I would have canceled it. For one thing, I needed a result to justify my pain. For another, I needed a result to justify my $140. Besides, I'm pretty sure I did good on the written bit, so I'm not going to worry about it.

As for the rest of the test, I still feel like I got about 20% of the questions right, but according to my results, I probably came out OK. Ironically, I scored higher on the quantitative section than the verbal, but I don't think I'm going to take it as a prophetic sign from above that I'm supposed to veer off into engineering or something. Between the engineering people and the humanities people, I'm guessing the latter will be much more impressed by my Ricardo Montalban essay.

Now as long as they don't look at that confidentiality agreement...
Posted by The Professor at 4:00 PM