The majority of my musical education came through the speakers of my family’s maroon 1983 Honda Accord. Most of the time the tape deck played an assortment of early 60’s Motown or Simon and Garfunkel, with the occasional saunter into Jim Croce territory. 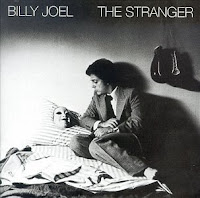 One of my favorite tapes was this album my mom picked up for my dad one year, a copy of Billy Joel’s “The Stranger”. Since the album was less than a decade old, it qualified as one of the few contemporary selections on the family menu (the others being Michael Jackson’s “Thriller” or the Pointer Sister’s “Break Out”). Some of my favorite childhood moments were sitting in the back of the family car in the middle of late night drives with the dashboard lit up in green as “Movin’ Out” or “Scenes From an Italian Restaurant” played out from behind my seat.

Last week the whole family got to catch Billy down at Energy Solutions Arena, letting me cross another name off my list of “Musicians I want to see in concert before they die/get deported/get abducted by aliens”. In the last several years, I’ve crossed Simon and Garfunkel, James Brown, and Ray Charles off that list (among others), but I never thought I’d get to scratch Joel since he’d supposedly retired from touring two years ago.

Then again, maybe he did retire. When Long Island’s favorite son took the stage Thursday night, he opened with a few obligatory self-depreciating remarks about his aging, balding frame. If so, Billy’s dad still has some mad chops on the keyboard. Once he transitioned from an impromptu “Jingle Bells” into “My Way”, I knew it was going to be a good night. I had heard he’d been using the tour to play some of his older, more obscure tracks, but he still gave the crowd plenty of favorites. For most of the night he mined his early catalog, which worked out great for me, since he wound up playing over half of the “Stranger” album, including the “Scenes From an Italian Restaurant” encore. He also played “Movin’ Out”, “She’s Always a Woman”, and “Only the Good Die Young”. Best of all, he whipped out the underrated classic “Vienna”, which sounds like it was written for me personally if you listen to the lyrics.

But as much fun as it was to finally see The Piano Man in action live, the highlight of the evening may have come from one of his roadies. About halfway through the set Billy announced that his next song would feature a member of the road crew, a longtime roadie named “Chainsaw”. With that, the band kicked back into gear, and for the next five minutes a short heavy-set guy in shorts, a T-shirt and military boots stalked back and forth across the stage while sneering at the audience and screaming the lyrics to AC/DC’s “Highway to Hell”.

More of the good old hits followed, like “New York State of Mind”, “You May Be Right” and “Don’t Ask Me Why”, as well as his newer hits like “We Didn’t Start the Fire” and “River of Dreams”. I was happy to have him play “It’s Only Rock and Roll To Me” as well. Most of all it was just great to have the whole family there to see it. As much as they influenced my love of music all these years, they have only been along to see a few of the acts in the flesh.

After a full night of great hits and little Christmas carol ditties, Billy capped things off with “Piano Man”, and even let the crowd sing the chorus on their own before waving goodbye and finishing with a bit of trademark New York advice: “Don’t take any s--- from anybody.”

Billy sure didn’t that night. And he didn’t give any either.
Posted by The Professor at 10:57 PM