OK kids, as I was looking through some of the photos I shot at last week's Jazz-Portland game (full blog/photo essay to be forthcoming), I came across a shot that I think might explain some of our current woes against Houston.

For those of you who haven't been following the story, the Jazz are currently down 2-0 in the series to the Rockets, and one of the primary reasons--other than Andrei Kirilenko's grossly mistimed meltdown--is the offensive absence of Mehmet Okur.

(Meaning his offensive game, as in points he usually scores, as opposed to his BEING offensive, as in smell. Of course, if we are referring to his offensive absence being offensive, as in, "Ho there, I am offended that Memo has failed to hit any 3's tonight", that could actually be a correct interpretation as well.)

Thing is, Memo hasn't been producing numbers-wise for several weeks, and many feel that the added burden of guarding China's answer to Ivan Drago all night is wearing him out on the defensive end.

At any rate, here is a photo that, if it doesn't explain the direct cause for Memo's recent struggles, at least provides a metaphor for the team's circumstances for the last month. 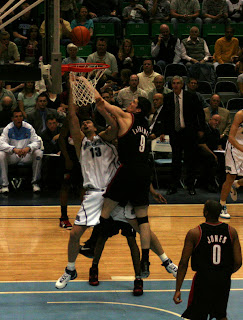 Posted by The Professor at 2:42 PM