In the middle of a General Conference weekend featuring Anti-Mormons in bad t-shirts, Conference Center scalpers, and a constant stream of Asian spam to my g-mail account (which is somewhat refreshing compared to the usual glut of ads for fake Rolex’s, weight-loss programs, and lonely housewives), I flipped open my cell phone to discover a blank screen.

It wasn’t a “you forgot to turn on your phone, dummy” blank screen; it was a “what is this dull blue hue on my screen?” blank screen. After a bit of experimentation, I soon established that I could dial out and receive calls in the phone’s crippled condition. I just couldn’t see who I was calling, or who was calling me. Essentially, it was like using a regular phone again.

Not for fifty bucks a month, bucko.

Given that my total backlog of memorized phone numbers these days is three*, I promptly jumped in my car and made for the closest Cingular outlet. I had no pressing calls to make, nor to receive; I just wasn’t in the mood to have one more thing stop working.

This wasn’t the first time my screen had come up lame. I took the same phone down the Zion’s Narrows last summer (as my five loyal readers will remember**), taking the precaution of transporting my sensitive electronic appendage in a Dry Bag. After sixteen miles of ankle-splitting nature strolling, I discovered that the Dry Bag apparently only works when you don’t get it wet.

Two days later the phone miraculously healed itself, and came back on at full operational capacity.

This time, though, my phone had no contact with liquid of any sort, so unless I mistakenly tried to pour Hawaiian Punch in my pants pocket before leaving for Priesthood Session and forgot all about it, this was a purely spontaneous meltdown.

After a brief consultation with a sales kid that was half my age (seriously—he was fifteen***), I emerged from the Cingular Wireless store with a brand new phone and a renewed two-year contract, all at the low, low price of $140.00. This was actually at a discount, since I’d fulfilled my initial contract.

According to my sales kid, my screen was “fried”, with no hope of resuscitation.

"I think your screen is just fried," he said, to be precise.

He also seemed to think I had a crap phone, mostly, I suppose, because it had no camera, web browser, full alpha-numeric keyboard, MP3 player or cloaking device. I didn’t disagree with him; the fact is I could care less if my phone has any of that stuff.

Still, my new phone has a camera on it, so I’ll be ready if I ever go see Michael Richards at the local Wiseguy’s club. I also get a rebate of $50, as long as I follow the patented 12-step process for application that I think involves a blood test at some point. And so my all-time cell phone total comes to five, and I’ve got a perfect excuse for a mini-photo essay. 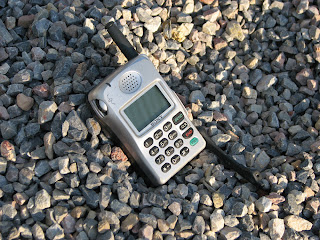 SONY: Here is my first cell phone, which looks more like the love child of a calculator and a kid’s walkie-talkie, with a slight increase in range and reception quality. I picked this one up courtesy of my long-time friend and tech hook-up Randy, back in the summer of 2000 when he was still laying the groundwork for his ultimate eBay empire. It was a funky little thing, and I enjoyed it for a couple of years until the casing started to split apart. 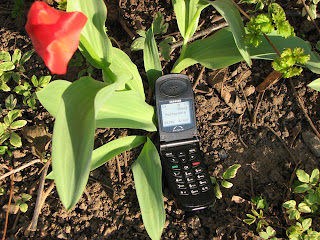 SAMSUNG I: When the Sony started coming apart on me, Randy gave me his old Samsung, a little black thing that worked just fine, aside from the fact that the vibration function didn’t work. Folks that spend more than 50% of the work week downloading ring tones won’t understand this, but the vibration function is vital to me. I NEVER leave my phone on a ring tone. Intentionally, anyway.

(Illustrative side note: One time several years ago I tried to call my friend Spence on his cell phone. About an hour later, he returned my voice mail and informed me that I had called him while he was reviewing a course syllabus with a class he was acting as TA for. Specifically, he was reading the bit about not bringing cell phones to class. Now that's timing.) 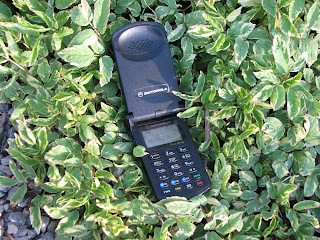 MOTOROLA: I can’t remember if something went wrong with the Samsung or not; maybe I just got tired of not having the vibration feature. Anyway, somehow I wound up with this Motorola for a year or two, which looked much older than my Samsung. I didn’t care too much about that, though. By this time I was beginning to revel in my anti-technology glory. As much as a guy with five e-mail addresses, two Web sites, a Mac, and a heavily used iTunes account can, anyway. 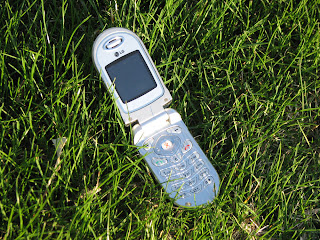 LG: Eventually I yanked the antenna out of my Motorola--possibly in a fit of rage at yet another unreturned phone call from a girl in the 32nd Ward--and with the help of some industry insiders (an old friend named James and Randy, again), I switched phones, and this time, providers. By switching from Verizon to Cingular, I got free roaming and rollover minutes for about the same rate plan, plus I got my long dreamed-of color display screen and the ability to get text messages with lots of smiley faces. On the downside, I couldn’t customize my display to read “MOTHERSHIP” anymore. 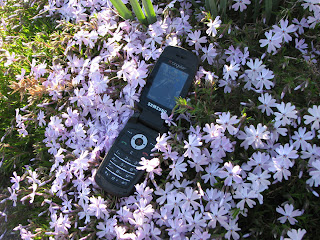 SAMSUNG II: And now, once again I find myself the proud owner of a Samsung phone. Now I’ve got a camera…and that’s about it. The built-in bowling game isn’t nearly as fun as the Centipede knock-off the LG had, and I’m not used to the layout yet. Innovation comes at a price, I guess. $140.00, until I send in my rebate.

Oh yeah, on Monday morning my LG screen came back on.

** It occurs to me that I need to come up with a name for my five loyal readers, something like Jim Rome’s “Clones” or the Grateful Dead’s “Deadheads”. If any of you have any ideas, pass them on, keeping in mind the fact that you can’t choose your own nicknames, and I’ll pick what I want regardless.

*** One more clarification: the kid was not fifteen; he was probably twenty-two. What I meant to illustrate is that I resent being at a power disadvantage to people younger than me. Plus yesterday I found out my landlord is younger than me, too. What a pisser.
Posted by The Professor at 11:18 AM