Local blogger thanks guy in Pittsburgh for boosting hit count

, —A local blogger went out of his way Wednesday to thank some fellow in for boosting his monthly user statistics on sitemeter.com. 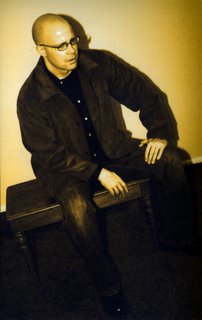 “I don’t know who this guy is,” said Josh from behind his desk at the , “but the guy spent like an hour and a half looking at my stuff, and that’s really going to boost my average visit length numbers for December.”

For the past eight months, Josh has been regularly updating The Wounded Mosquito, a free blog he started through www.blogger.com. Over that period, his own routine checks have represented about half of his total visits.

“I’d estimate that I’ve got a regular readership of about four people,” Josh says. “I know my friend Brad reads regularly, and I’m pretty sure I’ve got some family in that’s reading this thing every once in a while. That’s about all I can gather from my site stats.”

Thanks to a recent enlistment on sitemeter.com, Josh has been able to track certain traits of his visitors, such as where they are reading from and how long they are spending on his site.

“The site meter thing works pretty well,” Josh says, “but it’s not always accurate. Sometimes it will only register one hit for zero seconds, even when I know they’ve looked at more than that. I know because the reader was me.”

Ever since graduating from in 2004, Josh has struggled to build the consistent readership he had as a columnist for USU’s Utah Statesman.

“I kept updating my own personal site, www.planetvenison.com, but I don’t think anyone was reading it anymore,” Josh laments. “I guess I’m just not all that good at the marketing end of things.”

Which is all the more reason Josh is overjoyed at the efforts of the unnamed visitor from .

“Yeah, this guy was on Google looking for stuff about Elder Anthony Perkins, the General Authority. Not the ‘Psycho’ guy,” he says. “Anyway, the Google search led him to my site, cause last week I posted the priesthood lesson I gave on his General Conference talk. So he reads my site for a half hour, then links over to my Planet Venison site and reads a bunch of that, too.”

“The article he read was one of my better ones,” Josh continued, “you should check it out.”

The extended reading session is expected to boost the average visit time on sitemeter.com by about three seconds per visit. It is not expected to impact the daily visit average, which remains in the 4-5 range.

Josh’s membership on sitemeter.com has helped to satisfy a longstanding curiosity he’s had regarding his readership, even though there are limitations on the data.

“Funny thing is,” Josh says, “I keep calling this person in a guy, even though it really could be a girl. I doubt it, though…the sitemeter listing said the visitor had connected through a Hilton Hotel network, which means it was probably just one of my four regulars on a business trip.”

Posted by The Professor at 9:39 AM