An Open Letter to Giordano's 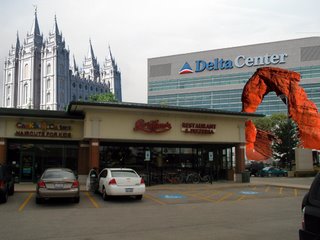 While recently perusing your tasteful brochure at the South Naperville restaurant, I learned that you have opened two locations in --the first outside of . I was excited to see you expand beyond your traditional Midwestern confines, but pained that you decided to do so in .

Everybody knows that is full of old retired people; "Miami Vice" was a scam designed to attract good-looking people to move there and build pastel colored mansions. Do these people even eat pizza? We should just put those sliding glass doors on their state lines or sell owes the Jazz. Back in the early 90's, when Michael Jordan was still a humble guy and the Bulls were still underdogs, I was a fan. When he retired early like Jim Brown, I thought, "cool". Then he came back, and while the Jazz were looking for NBA championship #1, came along and grabbed #5 and #6. That sucks. If you guys believe in karma, you'll do what you can to patch this thing up quick.

Now, one of the risks of franchise expansion is the dilution of product quality. This is what happened to Taco Bell. When they were small, they were great. Nowadays I know in my mind that the food is inferior, and I know in my heart that each hot sauce packet shortens my life by twenty minutes, yet something else still gets me over there...possibly my spleen.

The solution to this problem is restrictive expansion--start small and keep tight reins on the new franchises. Only sell to owners with large forearms that can imitate good accents. Larry Miller has big forearms--and one really big elbow--but I don't know how he does with accents. Plus he cries publicly from time to time.

If you open up a Giordano's in , I pledge to eat there once a week for the next six months. Unless you open it up in . Every time I go to someone tries to recruit me into a Ponzi scheme, and that's a once-a-month experience at most.

I eagerly await your reply. Attached is a photo of what a Giordano's would look like in .