The Ten Least Embarassing Movies in My DVD Collection

A while back I wrote about the 10 most embarrassing movies in my DVD collection. Here are 10 of my prized DVDs, to bring balance to the Force and restore a little of my street cred:

After renting this on VHS several times and going to screenings at the Tower Theater, I was psyched to be able to pick this up on DVD. It's a local film directed by Trent Harris about a multi-level marketing burnout (Howard Hessman--Dr. Johnny Fever on "WKRP") and a 20-something loser in elevator shoes (Crispin Glover--Marty McFly's dad in "Back to the Future") who drive into the southern Utah desert to bury a frozen cat. No, I'm totally serious. As a bonus, the two leads meet in front of the statue by the downtown Salt Lake Federal Building where I worked for five years.

Bottom line: any fan of Wes Anderson must see this movie. The plot is about a 20-year-old kid who is obsessed with death, and the 80-year-old woman who helps him to appreciate life. It features a killer soundtrack from Cat Stevens and a British roadster converted into a hearse. More importantly, its mood and style tell you where Anderson got a lot of his inspiration. In fact, the kid who plays Harold also played the kidnapped accountant in Anderson's "Life Aquatic."

"Freaks" was made by Tod Browning (same guy who did the original "Dracula") back in the '30s. It's a cute little story about a group of circus freaks and the carnies who abuse them. Seriously, it has a very powerful message about the nature of true evil (IE, people laugh at the "freaks," but the carnies are the real monsters), but since Browning used honest-to-goodness circus freaks as actors (no CGI in 1932?), people found the film...a bit too creepy. It was banned in Britain for decades, and now it's a cult hit. It also provided some inspiration for The Ramones in the '70s.

There's a new version of "Superman II" out in circulation that is reportedly the version director Richard Donner intended to create before he was replaced by Richard Lester ("A Hard Day's Night") halfway through production. Honestly? I like Lester's version better. "Superman II" is an awesome blend of legit cool superhero narrative and fun camp. Superman is fighting both Lex Luthor (Gene Hackman) and three super-villains, including the infamous General "KNEEL BEFORE" Zod. Eight years ago I made the argument that this was the greatest superhero movie of all time. And now, even after "The Dark Knight," and with all apologies to Heath Ledger, I still think I'd say the same.

"Wrath of Khan" has the distinction of being the only film on this list that inspired me to write a 15-page conference paper in grad school. (You can read it here. No really, go ahead and read it.) I've often thought that if there was a Star Trek film that was best suited to appeal to non-Star Trek fans, this was it (and that includes the new JJ Abrams film). It's got a great story, solid effects, and most importantly, an awesome villain. Ricardo Montalban makes the film worthwhile by himself.

6. Night of the Living Dead

Might be the scariest movie I've ever seen, next to Pauly Shore in 1993's "Son-in-Law." It's definitely the scariest movie I've ever watched by myself in my parents' basement at 1am. This film single-handedly bridged the gap between the cheesy drive-in horror movies of the 1960s to the underground indie horror of the '70s. I'm pretty sure the torch gets passed right after the pickup goes up in flames.

Pele, Michael Caine and Sylvester Stallone play soccer against Nazis. Read that sentence again. What's really impressive is that the movie completely works on a serious level, in spite of the utter lunacy of its presence. One of the great sports movies, though few have heard of it.

The plot's pretty simple: someone kills a witness under Steve McQueen's protection, and McQueen spends two hours tracking them down. Nothing super unique, except for the high stakes car chase about halfway through between a black Dodge Charger and McQueen's '68 Shelby Mustang. Not only is it a great car chase (through the uneven streets of San Francisco), it's also basically the first car chase ever put to film.

Before he became famous for movies like "Blue Velvet" and "The Elephant Man," David Lynch made a little black and white film about a brand-new father who takes his hairstyle cues from boxing promoter Don King. The film is reportedly an examination of Lynch's own fear of parenthood, but after spending some time in his super-impressionistic nightmare world, it seems obvious that parenthood is just one of many fears that is being explored.

Most diehard Beatles fans have seen "A Hard Days Night" and "Help," and some have even seen "Yellow Submarine" and "Magical Mystery Tour." But the Holy Grail of Beatles films is the documentary that was made while the band was trying to record "Let it Be" and splintering into a thousand pieces. It features such gems as George Harrison and Paul McCartney bickering over guitar solos and finishes with the famous "rooftop concert" that turned out to be the band's final public performance, and was honored in the U2 video for "Where the Streets Have No Name." 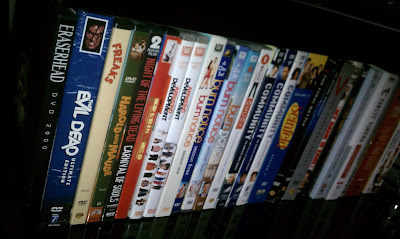 Posted by The Professor at 4:40 PM