When it comes to singing in public, my resume is short and checkered. It begins with an ill-fated tryout for my fifth grade musical, when I gave a horrid rendition of some long-forgotten tune about five feet from the accusing eyes of my grade school crush. Then there was the time I was all set to sing lead for my band Thunderlips when we were going to headline the ill-fated 32nd Ward Toga Party of 2001. A well-timed lightning bolt put an end to that effort. Later that fall, when I did manage to sing lead for the band (during a brief set we played out of our guitarist and bass player's garage), I barely had my voice back before I was dumped by my would-be girlfriend of the time.

The only thing that ever kept me thinking I might have the chops for a lead vocal (aside from my genetic connection to my sister, an accomplished opera-style vocal minor at Weber State University) was a brief but memorable performance at the Blue Chicago--my favorite Windy City blues club--almost fifteen years ago. Ever since I warbled my way through a single stanza of "Baby Meet Me with Your Black Drawers On," I had always wondered if I could really pull off a legit bluesy lead vocal for a whole song. Or any lead vocal, really.

Thanks to a dual show at the Layton Amphitheater last month, I finally got my answer. And that answer was: yeah, pretty much. Halfway through my blues band's set, I stepped down from my drum riser, passed off my sticks to our normal lead singer, put on my beloved leather fringe jacket, and sang a little Neil Diamond for the dedicated crowd. I didn't blow anyone away, or make my bandmates think I should take over permanently on lead vocals while we look for a new drummer, but I didn't embarass myself, and when I watched the video recording of the set later that night, I didn't recoil in horror and destroy the footage in desperation. I got the job done, plain and simple. 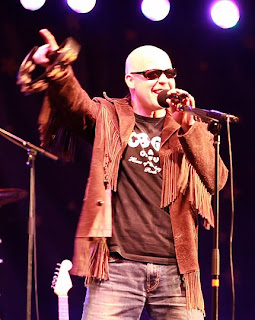 As fun as the actual performance was, the best part of the experience was talking to people after the show and noting how much it seemed to surprise them. Outside of the band itself, only one or two people knew the switch was coming, and so my take on "You Got to Me" was a complete surprise to nearly everyone. As a band, one of our main concerns going into the show was that we didn't offer a repetitive experience to what they'd seen in previous performances. Shaking things up with something as simple as me taking over lead vocals helped to accomplish that goal. And on a personal level, it was a lot of fun to see the reaction of friends and family to me doing something they wouldn't expect me to do. I think that idea--the idea of pushing yourself into challenging and unfamiliar situations--is at the heart of this whole list I've been ticking away at for the last few months.

Last summer I stepped out of my comfort zone and played the drums on a stage that was out of my league, but I felt good about it because I tried. It's a lot nicer to do the same thing and find out that it isn't out of your league after all.
Posted by The Professor at 3:12 PM