I've been dating for a long time. If my first date were a child, he would be dating. And he wouldn't be having a good time, because he was kind of a disaster.

In spite of my vast experience, I still learn new things about dating all the time. Like new words. Here are some new dating-related terms I've encountered in recent weeks:

My friend Melanie coined this term at a group excursion to the Red Iguana 2 a couple months back. Derived from the word underrated, "underdated" refers to a man or woman who is comparatively inactive on the dating scene in spite of obvious qualifications, such as looks, personality, or the ability to read minds.

Here's how you would use the term underdated...

"Darryl has a great sense of humor and owns his own home, yet he hasn't had a steady girlfriend since the beginning of the Obama Administration. He is totally underdated."

...in describing a woman:

"Bernice graduated from law school with a 3.9 GPA and has a smile that lights up the room, yet she only goes on dates every month or two because she reminds people of Jodie Foster. She is underdated."

The second example offers a clue as to the reason for the underdated condition, but in most cases this reason is not readily obvious. It is a condition that is frequently unexplained, like being a libertarian.

This expression came up about a month ago while hanging with some of the guys (probably because we are all underdated). The expression "Bro'd Out" refers to a girl who has officially crossed over into "one of the guys" territory to such a degree that would make it impossible to view her in a dating context. After some discussion, we ultimately concluded that to become "Bro'd Out" is an involuntary, subconscious act that would be bad news to the subject in question. Indeed, it is especially tragic because it often results from an effort that was intended to have the opposite effect.

Here's how you would use "Bro'd Out" in a sentence:

"Wanda always greets me with a fist bump and calls me by my last name. She can also bench press me, and proves it uncomfortably often. She is officially Bro'd Out.''

Recently my former singles ward organized an activity that featured a "Dating Coach" When I asked about the event, I was told that the Dating Coach was something of a modern equivalent to an etiquette coach, who would teach boys and girls how to treat each other on dates and stuff.

Here is how you would use the term "Dating Coach" in a sentence:

"Last weekend my ward hosted a fireside with a Dating Coach, and I didn't learn anything."

While that's nice and all, I would be more excited to employ the services of someone a little truer to the title. To me, a real Dating Coach would actually go on your dates with you, watching from the sidelines, calling in plays, and screaming at me when I dropped passes. Someone who would be along for the ride and give me in-the-moment advice. Kind of like if Jerry Sloan and Will Smith's character from "Hitch" mated.

This is how my version of a "Dating Coach" would be used in a sentence: 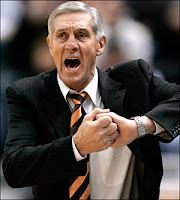 "I went into my third date with Teela sitting on a comfortable 2-0 record, and though I was able to  maintain a lively conversation at dinner and build a comfortable lead, I misread her signal during the movie and blew a chance to hold her hand. Luckily my Dating Coach was there to chew me out before the start of the fourth quarter, and as I dropped Teela off I noticed my coach hiding in the bushes nearby, tapping his shoulder with three extended fingers (the signal for "doorstep kiss"). So I executed a perfect crossover dribble and drove hard to the hoop for a clear-path layup plus the foul, scoring a three-point play and preserving my undefeated season."
Posted by The Professor at 5:09 PM