DENVER, CO*—Frustrated with his team’s poor showing in Saturday night’s brawl at Madison Square Garden, Denver Nugget coach George Karl pulled the trigger yesterday on a deal to inject a little Thug Life into his squad. Enter The Answer.

“After Saturday’s press conference, I just sat down in the locker room and cried like a baby,” said Karl. “For hours after that whole mess, I just felt awful. What an embarrassment, what a (expletive) embarrassment. What we showed out there was the worst of professional sports, the worst of what this team should represent. We should have kicked those Knick (expletives) up and down the court.” 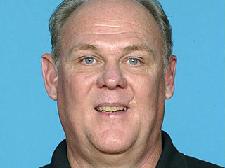 “I mean, did you see Carmelo take off across the court after that sucker punch?” continued Karl. “What a (expletive). You telling me he couldn’t take that (expletive) woman Collins? At least he threw a half punch instead of just rolling around on the front row with Mini-Me.”

Less than a week after Saturday’s already infamous brawl, recalling memories of the Malice in the Palace from two years ago, the Nugget organization found the remedy for their squad’s lack of toughness: former NBA MVP Allen Iverson.

“If there’s anyone I know of that can show Carmelo how to finish a fight, it’s Allen,” declared Karl as he slammed a clenched fist into a nearby locker. “You seen how many (expletive) tattoo’s that kid’s got? I heard he’s even got one under his left eyelid!”

The addition of Iverson will no doubt inject the Nuggets with a heightened street cred, which would have come in handy last weekend against Isiah’s Knicks. 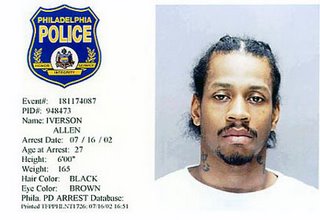 “You don’t think I wanted to order a hit just like Zeke?” demanded Karl. “I think everyone would like to see that pretty-boy Marbury go down. Who am I going to send in? Boykins? I’d just get hit with an ACLU suit again if I did that. (Expletive), if Francis had been in there, I’d have done it anyway. I hate that (expletive).”

Saturday’s brawl broke up a deadlock between at least three teams that were scrambling to acquire Iverson, including Boston and Minnesota. Some felt Iverson would be an ideal complement to former MVP Kevin Garnett in Minneapolis, and Boston had made serious efforts to get Iverson in green, though Philadelphia seemed hesitant to keep Iverson in the Eastern Conference.

“I love (expletive) Kevin like a (expletive) brotha,” says Iverson, “but Minnesota, man, that place is just too cold! Personally, I’m just (expletive) glad they didn’t send me to Utah.”

Sending Iverson to the already dominant Western Conference might be a concern for NBA Commissioner David Stern, who seemed tense in his comments early Wednesday.

“Well, at least you hacks might stop whining about an East Coast bias for a little while, huh?” said Stern. “I mean, who’s left? Who’s left? Shaq’s hurt, Dwanye’s bound to get hurt, and LeBron will be in LA in three years. You think I’m happy about this? You think I don’t lie awake at night, wondering if I can slip Charlotte down into the NBDL without anyone noticing? I got rid of the (expletive) ball, didn’t I? What more do you people want?”

Though the addition of Iverson to the West could further tip the winning scales, some critics have raised concerns about the idea of bringing Iverson in under Karl, a coach noted for his strict practice regiment.

Others feel Karl’s bigger challenge will be integrating Iverson onto a team that already features the league’s leading scorer. 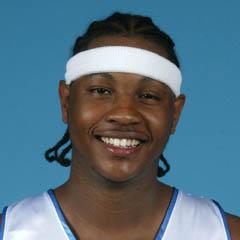 “Obviously it will be to our advantage to have Carmelo suspended for the first few games,” says Karl. “That way, no one will be around to stop Allen from showing the guys how to keep it real. Then when Carmelo gets back, Allen can take him under his wing. I hear he’s great that way.”

“I can’t believe how excited I am to be playing with Allen Iverson,” said Anthony via cell phone from Barbados. “This is like a dream come true. With Andre gone, I’m finally going to get like fifty points a game.”


*The content of this article is satirical. All quotes are fictional and intended to satirize public figures.
Posted by The Professor at 11:50 AM